One girls quest to figure out what happened to the words she wrote in her journal. 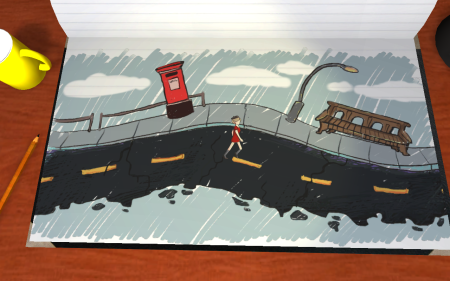 Many games have human relationships as part of their stories, however you don’t get games where these relationships are what the entire game is about.  Journal is a game that is all about how you interact with people in the world and how it alters their thoughts towards you.

Journal is being developed by Richard Perrin, whose most recently released game Kairo was an abstract puzzler.  Journal is a completely different animal, however, focusing on your conversations with people and how they affect your relationship with them.  Written by Melissa Royall, you play the part of a young girl who goes to her journal to discover that all of the words she has written in it have mysteriously disappeared.  Your aim is to figure out what happened and restore the words.

In the Rezzed demo, there are three characters to interact with – the girl’s mother, her sort of friend and a groundskeeper.  As you try to get information about the missing words, you can talk to these characters in different ways, which will affect how they perceive you.  For example, a window has been broken and your friend has been accused of doing it, and you supposedly told someone that she did it, but you don’t seem to remember saying anything.  There are a couple of ways you can talk to your friend about what happened, one of which involves telling her that you blamed her, which makes her annoyed.  Once you’ve finished the conversation, words return to the journal.

The game itself actually takes place within the pages of a book, rather fittingly, and the sketch drawing style of the art lends itself well to a child’s story.  The narrative driven nature of the game, combined with your choice of how your talk to people, will surely add replay value if you want to go back and see what happens when you take a different attitude with people.

Journal is currently under development for PC, Mac, iOS and Android, and you can visit the Journal site here.

Mike is Brutal Gamer's Indie Editor. He has been playing video games since the early 90s and is fond of racing games, puzzlers and MMOs. Typing /played while in WoW makes him cry, but not enough to stop him playing some more.
@Ognawk
Previous Nordic Games picks up a pair of Atari properties
Next Eternal Warrior (comics) Preview