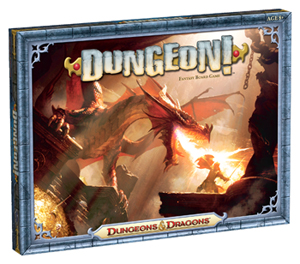 If you’ve ever played a Dungeons & Dragons board game, then you know they can be some pretty complicated stuff. It’s like playing an rpg on your tabletop, and there is so much to keep track of. This type of monster does this type of damage, but only to this type of hero – that sort of thing. Once you get the hang of it, it’s not so hard, but it can be a turn off for newcomers or kids who might otherwise enjoy the game.

DUNGEON! is the prefect solution to that problem. While it does have a certain level of complicatedness to it, it really isn’t any more so than say, Monopoly, and it can be a great way to bond with your monster loving kids – plus, like Monopoly, it really is good fun for adults and kids alike. It is listed as 8+, so we tested that thoroughly by playing with an eight year old. Not only did he thoroughly enjoy the game (and have no problems at all understanding it), but my husband and I did as well. This is definitely a low tech game that will be played often, and that is high praise indeed in today’s uber electronic world.

When you first open up the box, you may feel a little bit intimidated by all the pieces in there. There are cardboard markers that serve as your game pieces, a whole sheet full of pop out cardboard shapes like numbers, hourglasses, and scores of little tombstones, several decks full of mini cards, and two dice. Again though, if you look at how many items are involved in Monopoly (and anyone can play that game), it really doesn’t look so bad. And believe me, getting the board set up is the hardest part of the game, so once you get that done – you’re golden.

Setup goes a bit like this. Each player will choose a hero from four different types – rogue, cleric, fighter, and wizard. The choice you make has a lot of effect on your gameplay, which means you can mix it up in different games for variety. There are monsters and treasures separated by levels one to six, which match the levels of the dungeon on the playing board. Simply put, whenever you enter a new room, you draw the first monster card off that level’s pile. The card will tell you how high you have to roll on the dice to beat the monster (generally a different number for different types of hero). If you beat the monster, you’ll get a treasure card for that level, and place a tombstone in the room to show it has been cleared. If you do not, you role for the monster to see how much damage he does to you, and the monster remains in the room for the next poor soul to encounter.

That right there is most of the gameplay in DUNGEON!, and it really becomes second nature after a while. Your goal is to acquire a certain amount of treasure (different for different types of heroes) and then return to your starting piece, all without dying. The first person to do so wins the game. Of course, there are a few extras thrown in there to make things more challenging. For one thing, there is a finite level of rooms (and therefore treasure) per level, so you’ll often have to enter higher levels to reach your goal. Generally the higher the level, the more difficult the monsters, and the larger the payout (and risk). If a monster defeats you, your roll for him could do anything from no damage, to loss of treasures and turns, to death. Dying means starting back at the beginning with no treasure at all – and the treasure you lost is left in the room to be looted by your opponents. These sorts of things make for an interesting game that can turn around in a heartbeat.

Of course, this is a Wizards of the Coast game, so there has to be some magic in there – and DUNGEON! doesn’t disappoint on that front either. There are secret doors, and special cards like esp to peek on the next monster, or a magic sword that gives you +1 or +2 in an attack. There are even spells involved if you play as a wizard. All of this makes for a gripping game that sounds very complicated – but really isn’t at all once you get started.

DUNGEON! is the perfect game to introduce kids and newcomers to monsters and magicians in board game form. Whether you are a Dungeons & Dragons fan or not, this is just a fun game that will have you coming back for more.

Tags board game dungeon! dungeons & dragons wizards of the coast

U.S. Senior Editor/Deputy EIC at BrutalGamer, mother of 5, gamer, reader, wife to @MacAnthony, and all-around bad-ass (no, not really)
Previous Wreck-it Ralph busts up the Big Apple
Next NEO GEO X Gold up for pre-order (with a bonus)