Heroes and Legends: Conquerors of Kolhar Review: The game that tried its best. 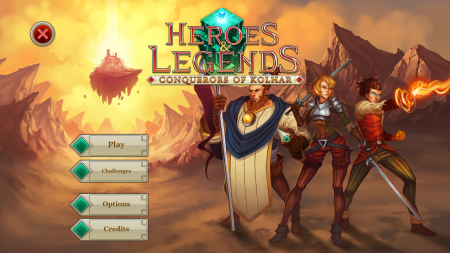 Heroes and Legends: Conquerors of Kolhar is a role-playing game that was developed by Cuve Games. It features similar elements from popular mobile games such as Summoner’s War and Brave Frontier, and that’s exactly what’s wrong with it when you get right down to it; this game may have fared much better on a tablet or a mobile device
instead of having it on a computer.

The artwork is, in the author’s opinion, done poorly. The characters are unremarkable, the backgrounds feel dull and the monsters don’t even give off a sense of tension as monsters should. The colors used are bright and pretty, which is nice, but the art could use some more work.

Likewise, the skill and attack effects (heck, even the battle system itself) are all reminiscent of DragonFable, which is an in-browser RPG. There again, though unremarkable the graphics aren’t that bad so I don’t want to make it seem horrible, it’s just that the look of the game is better suited for a different platform. 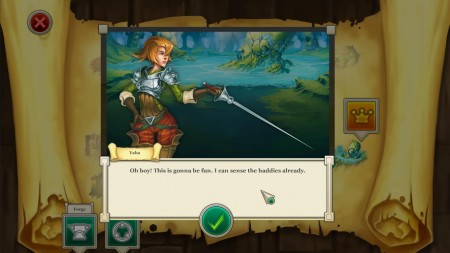 The music is okay and gives off a nice sense of ‘retro RPG’ gaming but again, nothing stands out and the music used in battles felt cheesy overall. Worse, over time it got to be downright irritating. Most of the tracks featured in the game are mediocre at best, but a good chunk of them are very similar to the battle music in that they get irritating as you play, and progress along the story’s path.

And about that story, it’s very much the usual as it stars a band of misfits who come together to form an unlikely party to save a fantasy kingdom. If only it was told properly and without any fragmentation, it actually might be decent; it’s not like the same story hasn’t worked a billion times before after all. Things start out in Medias Res, as the player is thrust into an investigation that they know nothing about, and eventually may even lose interest in altogether, as the characters tend to babble on and on without making much (if any) sense.

Even with all that though, the biggest issue I have with Heroes & Legends is the gameplay. It’s just terrible for a PC RPG, and is essentially a turn-based game without any turns. If I am to compare the battle system to anything I have ever played, it would probably be most similar to Child of Light, only without the finesse and skillful execution.

The characters will automatically attack the enemy in front of them without the option of changing their target or even pausing to issue commands. Everything is done in real time without any tutorials or explanations and that gave me a hard time at first. The battle system itself is actually easy to get used to though, but picking up what you’re supposed to do is more of a haphazard guessing kind of learning than an instinctive one. The game is a battle-after-battle experience too, with minimal explanation and barely any exposition. It would definitely have fared better if the storytelling was improved and the battle system refined. 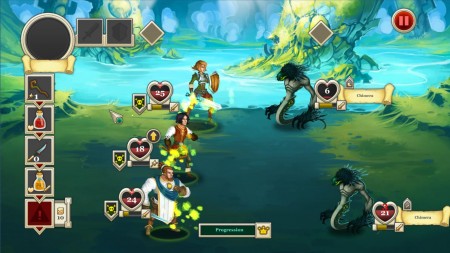 Heroes & Legends: Conquerors of Kolhar isn’t all bad, but it does get boring – fast.

To be fair, the game was made on a modest budget, so you really can’t expect a ton from it. Thing is though, if it was instead released as a mobile game with the storytelling and battle system even slightly improved, then I would give it a better review.

As it is, this game is recommended for RPG fans that have some time to spare, not the highest standards, and a lot of patience.