It’s November 22nd, and now it’s time for Microsoft to take the stage with the Xbox One! 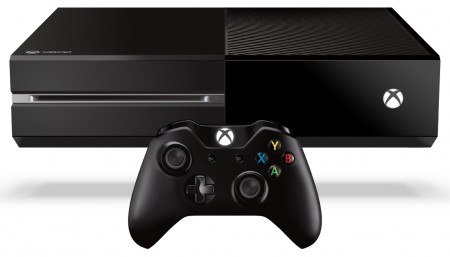 No matter which console you prefer, this holiday is certainly an exciting time to be a gamer.  The PlayStation 4 was released last week, the Wii U will be celebrating it’s first birthday next week and both it and the Nintendo 3DS have a lot of great games!  But let’s put all of that aside, at least for today. Because today, it’s all about the Xbox One.

Finally!  The day is here!  It seems like ages since Microsoft unveiled the first details about their third Xbox system during this year’s E3, and while some of the original ideas may have been changed a bit since June 2013, Microsoft’s objective for the Xbox One is still priority – they want to be the device in your living room to rule them all.

Sony, with its PlayStation 4 may have won over the hearts of the hardcore gamer, but Microsoft is hoping to attract more than just gamers – they are hoping that their Xbox One will also offer something for everybody else in the family — especially those who watch TV.

Early reviews of the Xbox One have confirmed that Microsoft has delivered on their promises — at least most of them.   While everything might not feel totally polished, in this day and age when video game console can evolve through software updates, the taste of what the future will hold was enough to keep reviewers interested.  Some to even give it a higher impression than that of the PlayStation 4.

Unlike the PlayStation 4, the Xbox One is massive — both is size and price.  The system itself, is significantly bigger than than the week-old PS4, and is more akin to the size of the original “fatty” PlayStation 3 and the first-generation Xbox 360 (along with the with external, snap on hard drive).  The system’s design tries to mesh more with your entertainment center, and appears to be more like an audio/video component than a system you’d play games on.

The Xbox One is also large in the cost department.  Priced at $499 (in the US), the Xbox One is $100 more expensive than Sony’s next-generation console.  Part of the higher cost, according to most, is due to the inclusion of the second-generation Kinect motion sensor camera.

Microsoft is doubling-down on the new Kinect, including it with every Xbox.   While the 360’s Kinect may have struggled to gain ground with the enthusiast crowd, early impressions show and overwhelmingly positive response to the Kinect on Xbox One, especially with its facial recognition and voice controls.  Microsoft is hoping that with its next-generation console, gamers will take advantage of Kinect’s voice controls to immediately switch between games, apps, and live television without needing to navigate through menus.

Will including a Kinect with every Xbox One pay off?  Only time will tell, but it certainly allows for a larger user install base for developers interested in releasing games and software that take advantage of the Kinect’s voice or visual detection.

While Kinect voice commands may have existed with the Xbox 360, with the Xbox One, it expands from simple app running for those who lazy to make a few flicks of the controller.  Gamers can turn the system on and off, through the simple commands, “Xbox, On” and “Xbox, Turn Off.”   Early claims state that in the time it would take most people to push the power button, and pick up and controller, the Xbox One can be powered on with its activation command and with Kinect recognition, you’ll automatically be logged in.

While people like me are interested in the games, it’s the technology that I find most interesting.  The Xbox One offers a few unique tech features.  While video game console have always included video output, the Xbox One offers a video input.  It should be stressed that video modes like composite and component are a things of the past.  Much like PlayStation 4, the Xbox 360 only offers HDMI output (and input).

What the hell is the HDMI input for?  Microsoft is hoping that you’ll plug your cable or satellite box into it.  The Xbox One acts as an IR blaster, meaning that once you confirm your location and what your cable/satellite plan is, you’ll be able to control your live television, again, with the your voice (or at least using your Xbox One controller).  Yes, this means that the Xbox One will be one massive universal remote, interacting with your television programming. 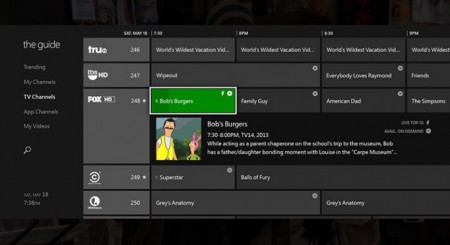 Not only can you watch live television, you can do so while you play games.  Those who are familiar with Microsoft’s new Windows 8/8.1 operating system already about the Windows Snap feature where you can, through split screen, runs two unique applications at the same time.  The Xbox One also takes advantage of this feature allowing gamers to run other Xbox One apps alongside their games, or apps alongside live TV, or apps along side apps.  Think of it as a picture-in-picture for the next generation.

I realize that I’ve rambled on about the Xbox One for much longer than I did last week with the PlayStation 4, but that’s because of the unique features that it offers.  But not everything made it to the launch date.  While we’re not talking about “cutting room floor” sort of exclusions, it is a bit of a bummer to know that the Xbox One’s ability to stream living gameplay through Twitch.TV isn’t going to see launch date, or launch year.  Instead this feature has been moved to early 2014.  This is certainly a plus in for the PlayStation Nation.

But what does the Brutal Gamer staff thinks about the Xbox One?

Ted Stokes has this to say:

“For the launch of this new console generation neither side have that ‘must have’ launch day title, but when looking at Microsoft’s console and deciding if you should buy it things are a little more complicated. The corporate higher ups have been putting out comments about wanting to bring back to life gaming on Windows. With Titanfall being a paid for Xbox One exclusive also being released on PC it works as an argument against having to buy Microsoft’s console to play their exclusive titles – why not just stick to PC? Then again they do have one strong argument they have kept in their back pocket. Halo.

Since the launch of the original Xbox the Halo franchise has been what (if not the only reason) a large number of gamers have bought Xbox’s to play and if not that Gears of War. After a much delayed release of the original titles for both franchises on PC Microsoft made the sequels console exclusives. Those franchises have kept to the Xbox and regardless of whatever Sony comes out with or what is released on PC the Halo franchise is enough to make anyone on the fence now about buying a console be sure to pick one up when the inevitable game and console bundle appears on the next Halo’s release.

So for Halo fans the question becomes not if you should pick up an Xbox One, but when? Now while statements are coming out about streaming features heavily promoted at E3 have fallen to a delayed activation date next year, or later when there might be some used consoles coming on the market? What’s strange is we haven’t seen any big retailers doing a promotion to sell off their stocks of Xbox 360’s on the cheap knowing after this holiday season they will go the way of Betamax.”

Brutal Gamer veteran Mike Jones, already went with the PlayStation 4 primarily for the price, but he says, “I intend to get an Xbox One next year at some point.  Playing Titanfall at Eurogamer Expo earlier this year might have convinced me to pick up an Xbox One instead, but they announced it will be coming to 360 as well, so that’s another reason to get an Xbox One… as far as I’m concerned.

Halo I don’t much care about, Forza 5 underwhelmed me at Eurogamer Expo, and I love the Forza series, so that was a surprise.  If you love Halo, getting an Xbox One is a no brainer.  It’s likely Microsoft will dump the 360 a lot quicker than Sony will drop the PS3.”

Kyle had this to say, “I was going to get one next year, then I was definitely getting one at launch, then I cancelled my pre-order, and now I’ll be getting one as a gift in the morning. Like the PlayStation 4, I wouldn’t have bought one at launch with my own money due to the lack of exclusives. I’m sure the Xbox One’s multimedia functions have an audience – what I question, though, is whether this is an audience which is worth chasing when they could be focusing on the dedicated gamer audience and seeing lasting success. If they can continue to put out quality titles while still developing their other stuff, then that’s cool – but who knows how it’ll go? As a gamer, all I really care about is having plenty of exclusives to play. The rest is take-it-or-leave-it.

As for the new Kinect, I’m not really sold on it. I tried a few Kinect games for the Xbox 360 and was thoroughly underwhelmed, but I understand this new one is supposed to be much better. I think I’d still rather stick with the traditional gamepad; but hey, it’s gotta be worth a try, right?”

Me?  What do I think?  I’ve always been a fan of Microsoft, anybody who knows me, knows this very well.  I’m an open-minded person, but I’ve been a fan of the Xbox since the original system was announced at the turn of the millennium.

While Microsoft is no underdog, bringing in billions a year, when it came to video game consoles they certainly were. So yeah, I have a special place in my heart for Xbox products.  I’m not a fanboy, but I am a fan.

In a perfect world I’d have both a PlayStation 4 and an Xbox One — in reality I have neither.

If you were lucky enough to pick one up, let us know what you think!  Is the $100 price difference worth it?  Is it not?  Leave a comment, post on our Facebook page, or Tweet us @BrutalGamer.

Troy is the Features Editor at Brutal Gamer. When he's not writing about or playing video games, he's enjoying life with his wife and children. He also loves coffee. And lots of it.
Previous This week’s Marvel cartoon block includes a double dose of Hulk
Next Looking for Xbox One accessories? These might fit the bill

Not one, not two, but three different trailers for Cyberpunk 2077 hit today from CD …