It’s a pirate’s life for me. 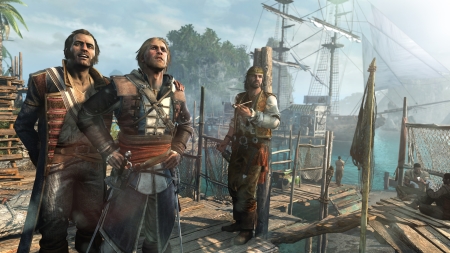 If you look at the themes of games these days, you can’t turn around without tripping over a glut of zombie games.  What the world could really use is some more games involving pirates.  Assassin’s Creed IV: Black Flag is a great example of an excellent pirate game.  It’s also a damned good Assassin’s Creed game as well.

Assassin’s Creed IV: Black Flag is the latest game in the long running series, and sees you put in the shoes and cutlasses of Edward Kenway, the grandfather of Assassin’s Creed III protagonist Ratonhnhaké:ton.  Edward is a simple man with a simple mission, a pirate who wants more than anything to be rich.  He has no allegiance to any colour or creed but his own, and the ongoing battle between the Assassins and the Templars is something he has no interest in getting directly involved in, but he keeps getting dragged into the conflict.  Although the battle between the two groups isn’t as big of a factor here as it was in previous entries in the series.

Black Flag is surprisingly simplistic compared to recent entries in the series.  You’re plunged into the action straight away, and your first mission is to chase and kill an Assassin, and you are introduced to the game’s free running mechanics.  Black Flag has no lengthy tutorial for you to play through, it just sends you in and teaches you what you need to know, when you need to know it.

A good proportion of the game takes place on the seas of the Carribean.  You sail around using Edward’s ship, The Jackdaw, in what has to be one of the truest open world games ever created.  You’ll find forts to take down, warehouses and smugglers coves to loot, islands to explore and whales to harpoon.  Hunting is a part of the game again, as you get items which you can use to craft upgrades for yourself.  You have a decent selection of weapons at your disposal too, from knives and swords to blow pipes, bombs and guns.  However you want to get the job done, there’s a tool for you.  Exploring the world and finding loot and buried treasure is hugely rewarding and makes for an enjoying experience. 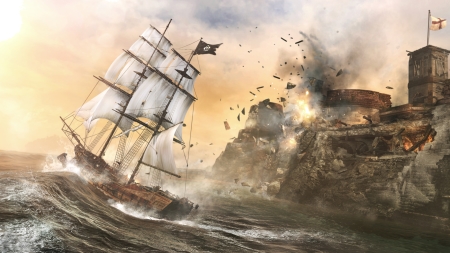 As well as exploring the world on your ship, you can also get involved with naval battles, with a variety of weapons at your disposal.  You can board enemy ships and take down the occupants, looting the ship for various materials and booty.  There are ships of various shapes and sizes for you to take on, with some innocent and some who want to sink you and your crew.  The materials you gather can be used to upgrade the Jackdaw, with new weapons and upgrades to existing weapons, and you’ll need these upgrades if you want to have any chance of taking down the legendary ships that can be found on the high seas.  The naval battles are enjoyable, although if I had one problem with it, the camera tends to rotate a little slowly, which makes changing which part of the ship you attack from a little frustrating at times.

The cast of rogues in the game are all well acted and memorable, with a combination of invented characters and real historical figures, like Blackbeard and Mary Read.  Black Flag doesn’t take itself as seriously as its predecessors, which makes it more fun.  The real world sections are still here, although they’re a lot shorter this time around, and with Desmond’s death, you’re playing through the eyes of an innocent Abstergo employee.  The real world sections are few and far between, and only about 5-10 minutes in length.  You can leave the Animus at any time and collect sticky notes and hack colleague’s computers if you wish, but it’s not necessary.

The good thing about a lot of the missions in the campaign is that things are less scripted, allowing you to achieve your objectives in mostly any fashion you so wish.  There are some very interesting tasks as well.  Unfortunately, there seems to be a rather large number of long missions that involve tailing, which to me are never fun, especially when you’re doing it for a good ten minutes, praying for the thing to end.  The story itself is simple yet interesting, although in Assassin’s Creed tradition, things do tend to drag a little as you come towards the end.  But you’ll have a great time getting there. 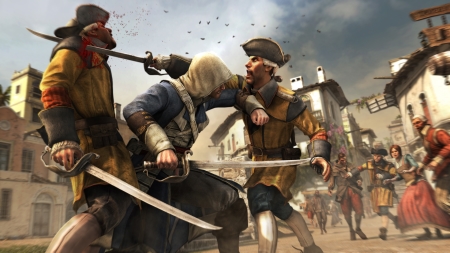 The Caribbean is a beautiful setting for this game, with lush jungles, long beaches with debris on them, and well worn cities bustling with activity.  When out at sea, the views and draw distance are stunning, with realistic looking waves that you have to navigate, and a great view of the islands and ships around you as you sail.

Multiplayer is back, and is practically unchanged from previous iterations.  There is a selection of modes, including FPS staples such as point capture games, but the main point of the game is to hunt others and avoid being hunters.  You’ll get contracts to take out other players along the way to gain extra experience points.  You’ll get even bigger bonus XP for doing it in a way that you don’t get detected by people.  It’s good fun and just as rewarding as before, especially if you want something a little different to the glut of FPS games on the market.

FINAL THOUGHTS
Assassin’s Creed IV: Black Flag is, in my opinion, easily the best game in the series.  The franchise has always been at least competent, and there have been some good games in it, but this is the first must buy game in the series in my opinion.  The game is beautiful and hugely enjoyable.  The naval exploration and combat add a lot to the experience.  If you’ve never played a game in the Assassin’s Creed series before, you can jump in here and won’t feel lost as to what’s going on, except for the occasional reference to previous events in the series.  The campaign is about 15 hours, but you can sink a lot more time into this with all the extra activities that you can participate in.  Add the excellent multiplayer to the mix and you’ve got the complete package.  Whether you’re a fan of Ubisoft’s series or not, you really should check this out.  A pirate’s life might just be for you.

Mike is Brutal Gamer's Indie Editor. He has been playing video games since the early 90s and is fond of racing games, puzzlers and MMOs. Typing /played while in WoW makes him cry, but not enough to stop him playing some more.
@Ognawk
Previous BandFuse reveals full 55 song track set
Next Activision cashes in with Ghosts to the tune of $1Billion 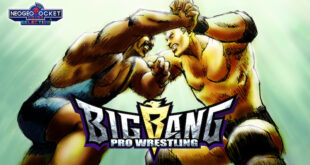 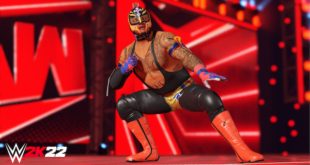