Realta’s rhythm game/guitar tutoring system takes the stage later this month with a full compliment of modern and classic hits. 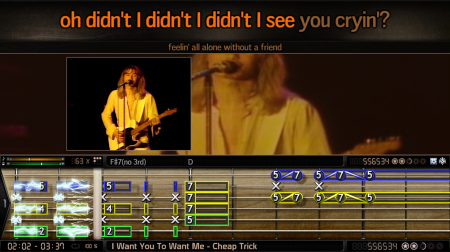 “Each and every song was handpicked for this game,” says Jeff Marshall, Director of Artist/Label Relations and Content Licensing at Realta Entertainment. “BandFuse provides players with the ultimate rock experience; not only can players learn to play the songs they know and love, but the game also challenges experts and n00bs alike to become better musicians.”

The whole rhythm genre has all but dried up outside of Ubisoft’s Rocksmith so it’s pretty neat to see the amount of work that Realta is putting into BandFuse. 55 songs total make up the track list and it’s a pretty varied selection with starring tunes from the ‘teachers’ in the game like Bootsy Collins and Slash and stuff by Billy Idol and Pearl Jam all making the cut.

Not too shabby right there. BandFuse is set to hit the market for the Xbox 360 and the PS3 on November 19th- just in time to bust it out at those Holiday parties.

Jason's been knee deep in videogames since he was but a lad. Cutting his teeth on the pixely glory that was the Atari 2600, he's been hack'n'slashing and shoot'em'uping ever since. Mainly an FPS and action guy, Jason enjoys the occasional well crafted title from every genre.
@jason_tas
Previous Deals: Atlus slashes prices for Dragon’s Crown and Shin Megami Tensei
Next Assassin’s Creed IV: Black Flag (Xbox 360) Review