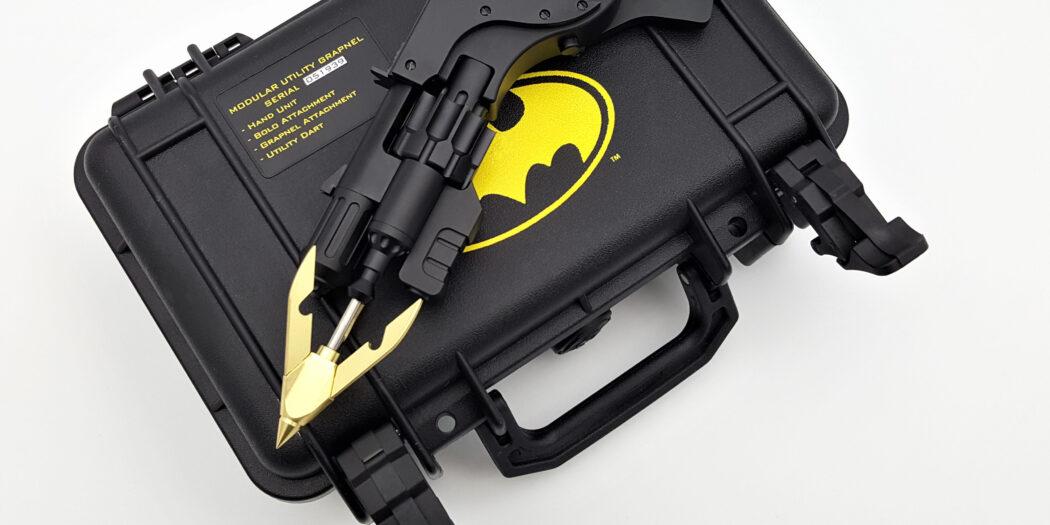 Ever seen a Batman Grapnel gun and wish it was just a little better? Maybe heavier, or metal instead of plastic? If so, you gotta see Paragon FX Group’s.

What a wonderful toy

Outside of maybe Batman: The Animated Series, I don’t think there’s much of an argument against the 1989 Batman film’s various gadgets being the most iconically “Batman”. Pretty much everything has had a lasting impact, from the Batmobile and Batwing, all the way down to the design of the grapnel gun. And it’s that, one of the Dark Knight’s most necessary tools, that’s set to get a new replica from Paragon FX Group.

If you aren’t aware of the company, Paragon is a high-end maker of replica movie props. The group has studied originals, casting precise copies for fans, and also completely reverse-engineered props from scratch, that’ve been lost to time. So, bottom line, if you’re looking for something that looks like the real thing, they’ve probably got you covered.

And right in line with that, looks to be the new Batman Utility Set.

Paragon’s Creative Director, Tyler Ham, explains; “We knew from the beginning that this would be one of our largest and most ambitious projects. The goal was to engineer a full-size replica that looks and feels like a real piece of Batman’s tech. We wanted everything to be cold to the touch and have a real-world heft and feel.”

The limited edition, museum quality set contains a machined aluminum hand unit, grapnel utility attachment, machined brass and aluminum utility dart/grapnel hook, bolo attachment w/ fixed aircraft cable, custom equipment case with laser cut insert, and a certificate of authenticity. Designed to satisfy the most exacting collectors,  the end result is a stunning, museum quality replica set that is sure to be the highlight of any collection.

As you might expect, this kind of craftsmanship doesn’t come cheap. But if you’re looking for a display piece that’ll actually get noticed, or you’re just a Batman mega-fan, then the Batman Utility Set looks tough to beat.

Priced in at $799.99 USD, the piece is up for pre-order now via Paragon’s online shop. You can find it here.

Jason's been knee deep in videogames since he was but a lad. Cutting his teeth on the pixely glory that was the Atari 2600, he's been hack'n'slashing and shoot'em'uping ever since. Mainly an FPS and action guy, Jason enjoys the occasional well crafted title from every genre.
@jason_tas
Previous Video: The newest clip from Legion of Super-Heroes showcases the Girl of Steel
Next Calling out in transit: Sonic survival horror in Chasing Static