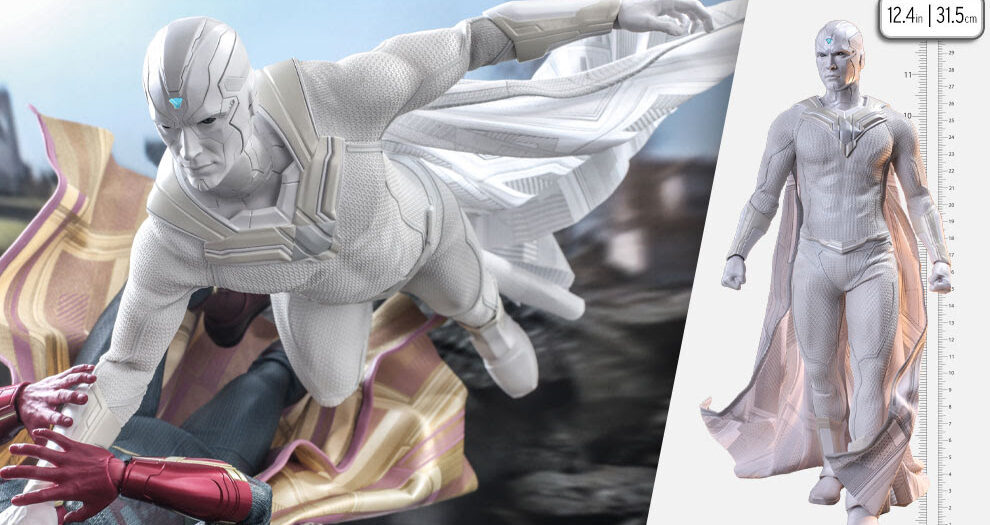 Home / Action Figures and Toys / WandaVision’s all-new, all-different Vis is about to ship from Sideshow Toys

Hot Toys is back, and this time the collectible company has its take on WandaVision’s seemingly-forgotten white version of Vision.

What happened to him anyway?

The so-called “Phase 4” of the MCU has been a little all over the place. We’ve gotten used to each of the previous phases having a punctuation to close it out, but this one has been way more meandering. Still, it has had major themes, like Wanda Maximoff.

The Scarlet Witch has played a huge part in Phase 4, both as a kinda-hero and a more straight-up villain. Don’t forget that she did some truly horrendous things before closing out her arc with a sympathetic tilt in Multiverse of Madness.

Not the least of her atrocities was the enslavement of an entire American town in WandaVision. Even though she wasn’t really the villain of that show, she had some major, uh, issues. But among everything else, WandaVision also introduced (and promptly forgot) the white version of Vision.

The character’s tale in the show was pretty short, and not adapted from the original comics. Since then we haven’t heard anything about him either, so it’s unclear if the white Vision will be back. But still, it was a cool addition the MCU, since it was (more or less) ripped from 1980s Avengers stories.

And since he appeared in the MCU, well you better believe he’s getting a Hot Toys figure. Actually, he’s about to ship too, set to come into stock before the end of the years at Sideshow Toys.

Having recovered his lifeless and broken body, they were able to channel some of Wanda Maximoff’s power to reactivate the synthezoid. While Wanda was occupied bending reality to her liking, S.W.O.R.D. sent The Vision to neutralize both her and the hex reality version of her husband that she had created!

Inspired by Marvel Studios’ WandaVision series, The Vision 1/6 Scale Figure by Hot Toys is presented in stunning white gradients with a shimmering outfit and light-up forehead piece. The figure features a hand-painted headsculpt with screen-accurate likeness, plus a highly poseable body dressed in a finely tailored, textured outfit with a white patterned cape. Two sets of eyes are included to recreate his look before and after he gains the original Vision’s memories. The Vision 1/6 Scale Figure also comes with an energy beam effect which can be attached to his forehead.

The Vision is still available for pre-order from Sideshow Toys, and you can find that here. Again too, he’s set to ship very soon, so if you pre-order now you still might get him for Christmas.

Jason's been knee deep in videogames since he was but a lad. Cutting his teeth on the pixely glory that was the Atari 2600, he's been hack'n'slashing and shoot'em'uping ever since. Mainly an FPS and action guy, Jason enjoys the occasional well crafted title from every genre.
@jason_tas
Previous Trailer: Frictional Games seeks to terrify players all over again with ‘Amnesia: The Bunker’
Next Trailer: The Walking Dead expands on Meta Quest 2, with Retribution