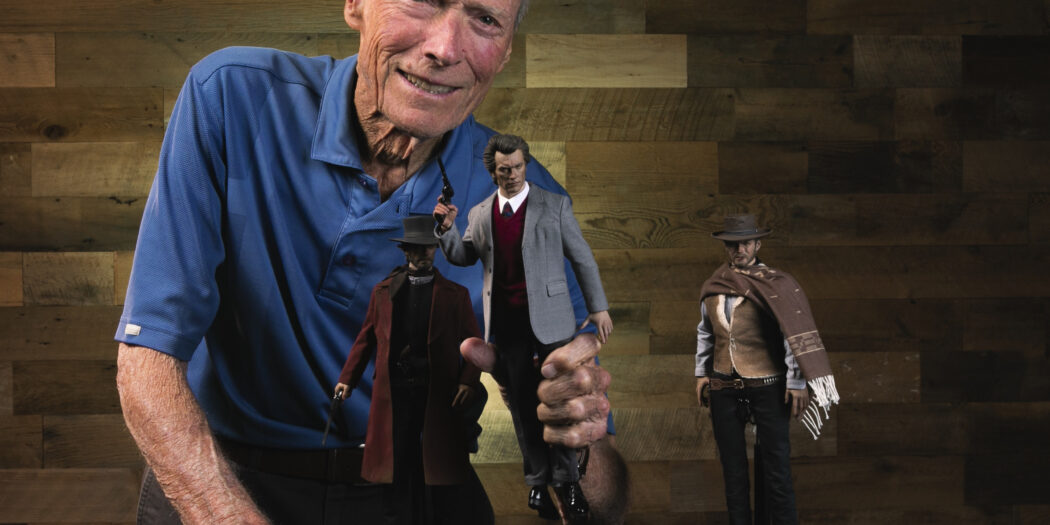 Home / Action Figures and Toys / Join the Sideshow team and Clint Eastwood himself, as they discuss the legend’s new collection

Join the Sideshow team and Clint Eastwood himself, as they discuss the legend’s new collection

Go behind the scenes on a pretty unique line, as Sideshow Toys and Clint Eastwood go in-depth on the Hollywood legend’s new collection.

They don’t come much more legendary, in terms of stars, as Clint Eastwood. A Hollywood mainstay since his first role in 1955, Eastwood went on from that small part to star in dozens of tinseltown classics. Those movies include some of the biggest and best known films of all time, with the likes of Dirty Harry, Unforgiven, Heartbreak Ridge, and a catalog of spaghetti westerns.

Yet despite all of that, there have been relatively few collectible items featuring Eastwood over the years. It’s a fact that will be seen to in short order thanks to fan-favorite, high-end toy maker Sideshow.

“Clint Eastwood is a cinematic legend. As an actor, he has portrayed some of the most iconic characters ever to be filmed. It has been a career high during my many decades in the collectibles industry to Art Direct these pieces, working exclusively and closely with Clint himself.”

Dubbed the Signature Series of collectibles with Clint Eastwood, the new series of 12″ scale collectibles will offer up some of the actor’s best-loved characters. The initial volley will include The Man with No Name, Dirty Harry, and The Preacher.

If you’re looking for authenticity too, then you have found the right line. That’s because the Signature Series was crafted under the watchful eye of Eastwood himself.

Here’s a look behind the scenes…

The Man with no Name

Based on Eastwood’s appearance in Sergio Leone’s essential spaghetti Western film The Good, The Bad and the Ugly, The Man with No Name Sixth Scale Figure features a meticulously crafted, hand painted steely-eyed portrait of “Blondie” with his instantly recognizable trademark hat and cigar. The mysterious drifter wears a custom-tailored fabric costume including a dress shirt, pants, a pistol belt with holster, a faux leather vest with faux fur lining, a neckerchief, and a removable serape.

Accessories include a selection of interchangeable hands, a pistol with an embossed snake grip design, a rifle, spurs for his boots, and even a replica rock to recreate memorable scenes from this classic Western.

This unrelentingly brutal neo-noir antihero is outfitted in a custom-tailored fabric costume including a shirt, pants, a burgundy vest, a striped tie, a belt, a herringbone jacket with elbow patches, and a shoulder holster that fits beneath the jacket. Accessories include a police badge, a wristwatch, a .44 magnum pistol, and a variety of interchangeable hands to replicate gestures and poses from the film.

Based on Clint Eastwood’s gripping performance in the genre-defining Western, Pale Rider, the Preacher Sixth Scale Figure features a hand painted portrait of the lone horseman. He wears a custom-tailored fabric costume consisting of his weathered red duster, a black buttoned vest, a collared dress shirt, a neckerchief, and black pants. A faux-leather bullet belt and sculpted boots with spurs complete the Preacher’s outfit.

Accessories include two different revolvers and a selection of swap out hands for a multitude of posing options.

Jason's been knee deep in videogames since he was but a lad. Cutting his teeth on the pixely glory that was the Atari 2600, he's been hack'n'slashing and shoot'em'uping ever since. Mainly an FPS and action guy, Jason enjoys the occasional well crafted title from every genre.
@jason_tas
Previous Trailer: Pinball gets Lovecrafty with Pinball FX’ Wrath of the Elder Gods
Next One Gift Guide to rule them all, here’s Sideshow’s “Lord of the Rings” best