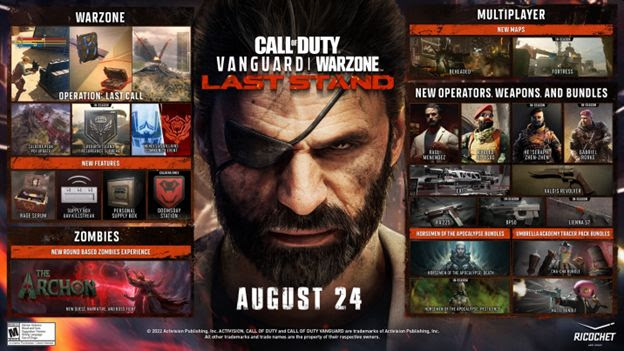 Home / News / Trailer: Bring on the bad guys, as Call of Duty closes out another season of content

Trailer: Bring on the bad guys, as Call of Duty closes out another season of content

Call of Duty: Vanguard and Warzone both have seasons coming to a close this week, and it’s a finale that’ll see the return of a few marquee names.

Last Stand is bringing major updates to all three gaming experiences. In Warzone, Caldera’s Peak is ready to rumble — players can wreak havoc or defend the island from sabotage. In Multiplayer, players will deploy to two new fast-paced maps, Beheaded and Fortress. The Zombies story continues the Dark Aether saga, where players face off against Kortifex the Deathless in Vanguard’s round-based finale, “The Archon.”

We told you all about the arrival of The Archon in CoD’s zombies mode last week, and you can read about that here. But The Last Stand is bringing a hell of a lot more than just zombies, across both Vanguard and Warzone.

Here’s a rundown of what you can expect, when the final season of content for the “Vanguard” era hits on August 24th:

Jason's been knee deep in videogames since he was but a lad. Cutting his teeth on the pixely glory that was the Atari 2600, he's been hack'n'slashing and shoot'em'uping ever since. Mainly an FPS and action guy, Jason enjoys the occasional well crafted title from every genre.
@jason_tas
Previous Mignola, Stenbeck, and Stewart returning to Hellboy’s netherworld for Koshchei in Hell
Next The creator of Dead Cells is bringing the heat to consoles in 2023 with Nuclear Blaze