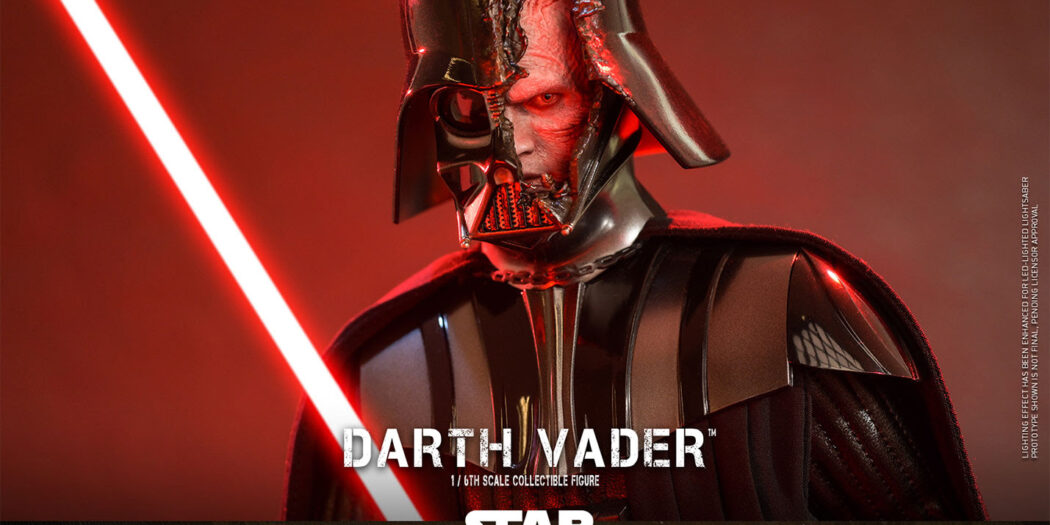 If you saw the Star Wars: Obi-Wan series on Disney Plus, then you know the moment that this new Hot Toys Darth Vader figure pays tribute to.

Well, if you haven’t seen this battle damaged Darth Vader at this point, I guess you have now. The figure plays off of what was the pivotal moment of the Star Wars: Obi-Wan series, which wrapped up not all that long ago on Disney+.

As you can see, that was a lightsaber duel with Kenobi, where Obi-Wan sliced into Vader’s helm and exposed part of his face. As many a fan have pointed out, it shared some symmetry with the now-famous scene in Star Wars: Rebels where Anakin Skywalker’s former Padawan did the same to the opposite side.

The figure here is a stunner, and replicates that battle damage perfectly. That’s right down to the exposed face of Anakin, which does have Hot Toys’ rolling eyeball feature, by the way.

Darth Vader‘s armor and weaponry have been painstakingly recreated in 1/6 scale, with a wealth of accessories including a battle-damaged chest control panel, LED light-up belt boxes, an LED light-up lightsaber, an interchangeable lightsaber blade emulating the weapon in motion, a pair of Third Sister’s™ lightsabers, and a rocky diorama figure display base!

Along with the standard version, there’s also a Deluxe coming, which includes quite a bit more. In the Deluxe, you get “an interchangeable helmeted head, chest control panel, and a space station inspired LED light-up figure display base for even more display options.”

The standard edition of Darth Vader is priced in at $295 USD, while the Deluxe is $330. Both are targeting a release date that’s quite a ways off however, and should start shipping some time between October 2023 and March 2024. Yes, you read that right.

Jason's been knee deep in videogames since he was but a lad. Cutting his teeth on the pixely glory that was the Atari 2600, he's been hack'n'slashing and shoot'em'uping ever since. Mainly an FPS and action guy, Jason enjoys the occasional well crafted title from every genre.
@jason_tas
Previous Trailer: Comic book adventure Aluna: Sentinel of the Shards comes to PlayStation
Next DST adds TMNT Minimate 4pack for double the anniversaries