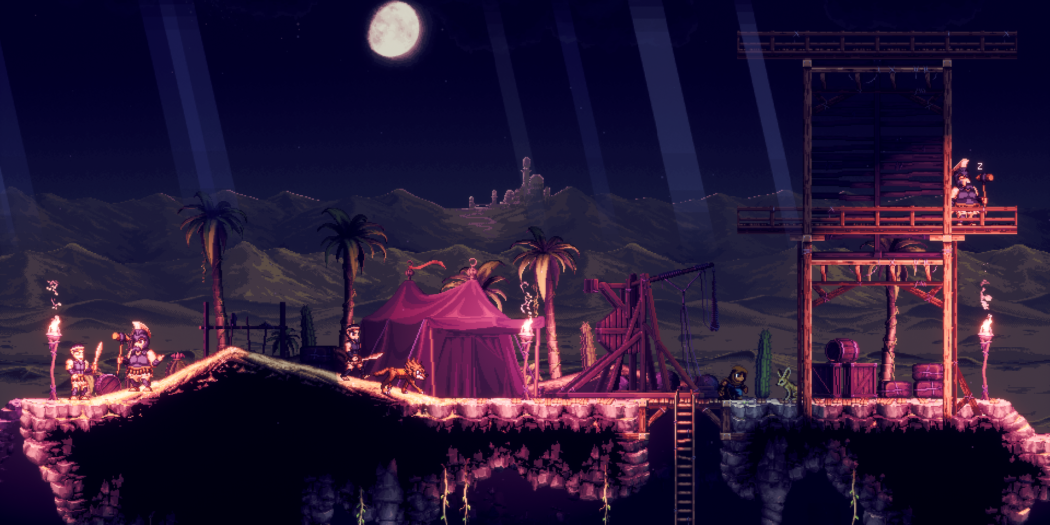 Stealth gameplay meets 16bit style in The Siege and the Sandfox

Were there any ‘stealth’ games in the 16bit era? If there weren’t, then The Siege and the Sandfox is remedying that. Check out the first look.

Now here’s an interesting new title. From Koch Media and developer Cardboard Sword, The Siege and the Sandfox melds several genres together, and wraps them up in a 16bit ‘retro’ package.

It’s being referred to as a “Stealthvania”, and with good reason. The Siege features what’s more or less a classic Metroidvania setup, with big branching levels that tilt gamers towards exploration. But on top of that, there’s a heavy stealth element, and “parkour platforming”.

The Siege and the Sandfox is a 2D stealth Metroidvania with parkour platforming. Explore the majestic palace and ancient prisons of a kingdom under siege. Don the mantle of the legendary Sandfox as you venture into the ruins below and discover the true threat from a sand-borne evil.

Use stealth to sneak through the environments, incapacitating enemies or ghosting past them as if you were never there. Run, jump, slide, shimmy, pole swing, and more as you navigate the intricate game world, find new items and equipment, and unlock previously inaccessible locations.

As great as The Siege and the Sandfox looks, it’s still a ways off. The game won’t arrive for the PC (via Steam, Epic, GOG, and Humble) some time in 2023.

Tags Cardboard Sword The Siege and the Sandfox

Jason's been knee deep in videogames since he was but a lad. Cutting his teeth on the pixely glory that was the Atari 2600, he's been hack'n'slashing and shoot'em'uping ever since. Mainly an FPS and action guy, Jason enjoys the occasional well crafted title from every genre.
@jason_tas
Previous Video: the final episode of Sonic Speed Strats focuses on… speed
Next Trailer: Comic book adventure Aluna: Sentinel of the Shards comes to PlayStation