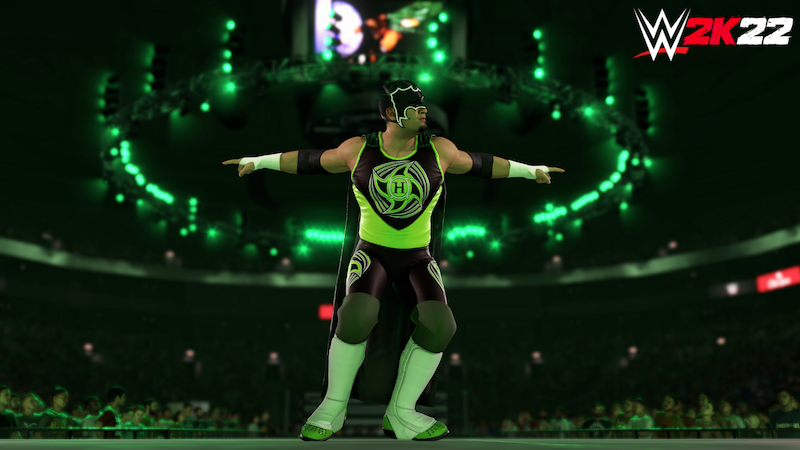 Stand back! There’s a DLC pack coming through (for WWE 2K22)

The Hurricane headlines a new downloadable content pack for WWE 2K22, along with iconic diva Stacy Keibler, and a selection of modern stars.

Shane Helms was a WCW star long before he arrived in the WWE, and a mainstay in that company’s Cruiserweight division. But once he made the jump, it wasn’t long before he adopted the moniker of The Hurricane, a wrestling superhero loosely inspired by DC Comics’ Green Lantern.

And it’s that version of Helms that appears as the headlining superstar in the new Stand Back Pack of DLC for WWE 2K22. Of course, he’s not alone, as fellow 90s icon Stacy Keibler joins him.

Formerly Miss Hancock in WCW, Keibler made an impact in a short period of time in WWE. She first appeared as assistant to none other than Mr. McMahon himself, before becoming a star in what would become the women’s division.

These two are joined by modern stars A-Kid and Wes Lee.

Want more? Well, that’s a good thing, because the Stand Back Pack also comes loaded with a “Booker T EVO card, Sapphire Seth Rollins card – featuring an alternate attire – and four gold Contracts, all for use in MyFACTION.”

But wait, there’s even more! Also included is a whole mess of FaZe Clan apparel. Don’t know that that is (I didn’t)? It’s a real-world clothing line that melds “gaming and youth culture”. A total of 14 items from the line are now in the game, “including men’s and women’s shirts, jackets and hats adorned with the FaZe Clan logo.”

The 3rd DLC pack for the game, the Stand Back Pack should be available now for all versions of WWE 2K22.

Jason's been knee deep in videogames since he was but a lad. Cutting his teeth on the pixely glory that was the Atari 2600, he's been hack'n'slashing and shoot'em'uping ever since. Mainly an FPS and action guy, Jason enjoys the occasional well crafted title from every genre.
@jason_tas
Previous Coming up: The games of June 2022
Next PCS’ massive new Krang statue hitting pre-order