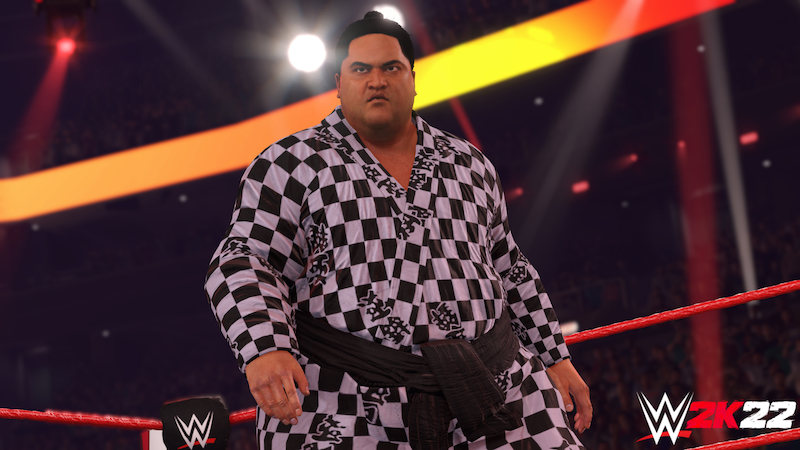 Banzai! The first DLC pack is out for WWE 2K22

It’s a big day for WWE 2K22 players, as the Banzai Pack is out and ready to squash opponents with new grapplers Yokozuna, Rikishi, Umaga and more.

If you’ve been playing WWE 2K22, then you have likely been waiting for this day. That’s because the DLC onslaught has officially begun, and new (official) wrestlers have begun making their way into the game.

Yes, some of the Community Creations that fans have been been turning out have been flat-out outstanding, but it’s always special to get the ‘real thing’. And today, that includes a DLC pack with a number of fan-favorite wrestlers.

First and foremost (for me anyway), that means Yokozuna. A legend from the 80s and 90s, Yoko was a monster in the ring, and one of the biggest heels in the WWE (WWF at the time). Clashing with the likes of Hulk Hogan, Brett Hart, and Lex Luger, Yokozuna is a former champ to be reckoned with.

Past him though, there’s also uber-popular 90s superstar Rikishi. Rikishi had a number of personas in the Federation, til he hit a homer with the Samoan party man, and partner of tag team Too Cool. And along with Riki is none other than his brother, “The Samoan Bulldozer” Umaga, as well as Omos and Kacy Catanzaro.

The Banzai pack is the first of 5 scheduled packs, and is out right now to be added onto your base copy of WWE 2K22. You can pick it up separately, but it’s also included with the Season Pass, Deluxe Edition and the “nWo 4-Life Digital Edition” of the game.

Jason's been knee deep in videogames since he was but a lad. Cutting his teeth on the pixely glory that was the Atari 2600, he's been hack'n'slashing and shoot'em'uping ever since. Mainly an FPS and action guy, Jason enjoys the occasional well crafted title from every genre.
@jason_tas
Previous Trailer: Rainbow Six: Siege gets mystical today with the Rengoku Event
Next DST’s deluxe Gollum arrives in stores