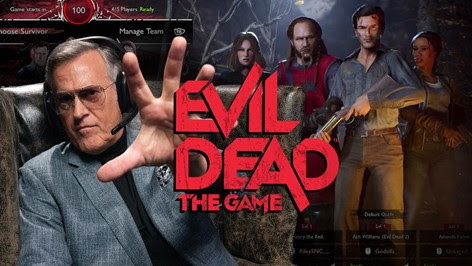 Home / News / Watch what happens when Bruce Campbell (kinda) helps play a round of Evil Dead: The Game

Watch what happens when Bruce Campbell (kinda) helps play a round of Evil Dead: The Game

Hilarity ensued when the man himself, Bruce Campbell (and his son Andy Campbell), sat in on a play session of the upcoming Evil Dead: The Game.

Coming up in short order, the latest stab at turning Evil Dead into a video game is looking like it might be one of the best. The premise is a simple one, team up with your buddies (with everyone starring as an Evil Dead series star) and take down another player in the guise of a brutal deadite.

It’s asymmetrical gameplay in the series’ now-familiar horror setting, and it looks like a ton of fun. To proving that end, “Ash” actor Bruce Campbell recently sat down with his son Andy and 4 hardcore Evil Dead fans to play out a session of the game.

The results? Some pretty funny stuff, and a clip that shows off much of what the game will offer.

Inspired by the iconic horror, humor and action of the “Evil Dead” franchise, Evil Dead: The Game brings the series’ biggest characters together in a pulse-pounding battle with the forces of darkness. Work as a team of four survivors, including Ash Williams, Kelly Maxwell, Pablo Simon Bolivar, Scotty, Lord Arthur and more, to kick Deadite butt and banish the vile Kandarian Demon. Or become the Demon yourself, using your powers of possession to stop the good guys dead and swallow their souls! Battle with more than 25 hard-hitting weapons and a variety of skill trees in multiplayer and bonus single-player missions to survive the night.

As you saw above, Evil Dead will have some very familiar faces that fans will know. But more than just service, the game will offer up finishing moves, a “fear” mechanic, and the ability to possess foes if you’re playing as a deadite.

All in all, it’s a title for both fans of Evil Dead and multiplayer gaming to keep an eye on. Evil Dead: The Game is set to haunt consoles and the PC on May 13th.

Is that a Friday?

Jason's been knee deep in videogames since he was but a lad. Cutting his teeth on the pixely glory that was the Atari 2600, he's been hack'n'slashing and shoot'em'uping ever since. Mainly an FPS and action guy, Jason enjoys the occasional well crafted title from every genre.
@jason_tas
Previous Get ready, Operation Monarch is coming to Call of Duty: Vanguard next week
Next Trailer: The insanity returns as Postal 4: No Regerts hits the PC