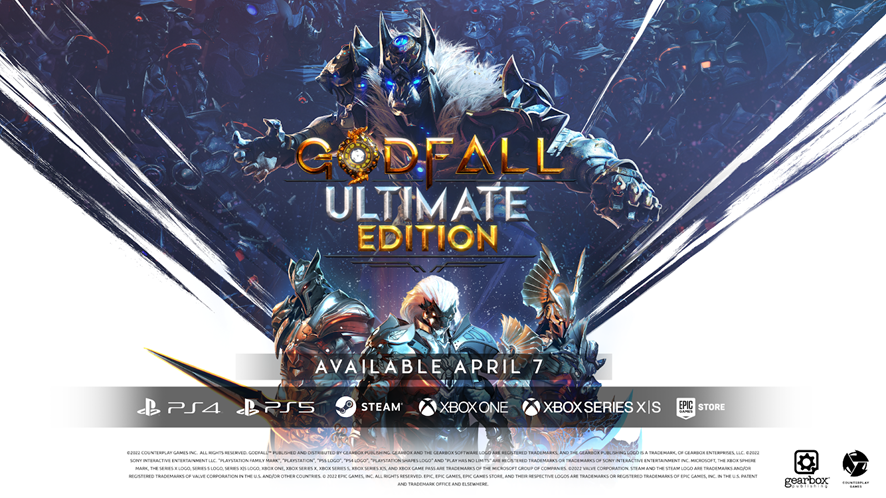 Home / News / Trailer: The Ultimate Edition of Godfall bringing the game to Steam and Xbox

Trailer: The Ultimate Edition of Godfall bringing the game to Steam and Xbox

Finally making the jump to the Xbox platform is Gearbox’ formerly PlayStation-exclusive hack ‘n’ slash Godfall with the Ultimate Edition.

“Godfall: Ultimate Edition is the pinnacle of the epic high fantasy adventure we set out to make when developing our ambitious next-gen RPG,” says Daniel Nordlander, Game Director at Counterplay Games. “Ultimate Edition not only opens the realms of Aperion to Xbox and Steam players, but also contains the recently announced Exalted Update, our latest and largest addition to the game. The combination of several major fan-driven changes and new platform availability truly makes this the absolute best time for anyone to join the fight against Macros.”

The Ultimate Edition of Godfall will debut the game on the Xbox Series X|S and Xbox One, plus bring the PC edition to Steam. But that’s not all, as the edition will also be made available on the PS4, PS5, and Epic Games Store.

Expect it on April 7th.

Jason's been knee deep in videogames since he was but a lad. Cutting his teeth on the pixely glory that was the Atari 2600, he's been hack'n'slashing and shoot'em'uping ever since. Mainly an FPS and action guy, Jason enjoys the occasional well crafted title from every genre.
@jason_tas
Previous Who you gonna call? How about the new ‘asymmetrical multiplayer’ Ghostbusters title?
Next Super7 announces wave 3 of GI Joe Ultimates! with Doc, Scarlett, Storm Shadow, and a Cobra Trooper