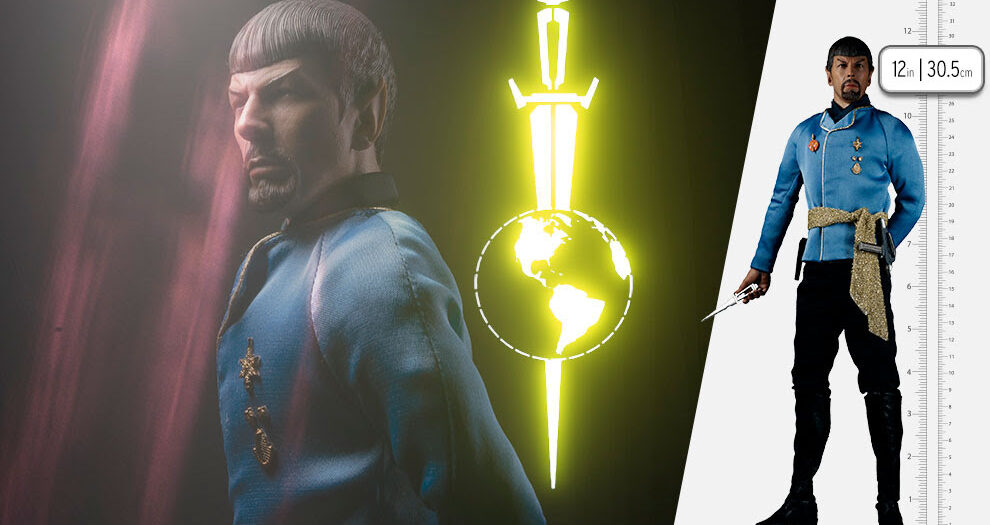 We’ve seen figures from the mainline Star Trek Universe, spread out across several classic shows, from EXO-6. But now things are getting… flipped.

One of the biggest continuing themes in the Star Trek U, despite it being absent for some time, is the Mirror Universe. The alternate universe has made several incursions into the main timeline (and vice-versa) over the decades, and features a radically different existence.

In the Mirror Universe, the Federation isn’t any close to the force for peace that it’s known to be. Instead it’s an empire, and one that’s constantly at war both with the rest of the galaxy, and itself. Let’s just say that serving on a Terran Empire starship isn’t great for your health or wellbeing.

Now this corrupt, violent place is set to infect EXO-6’s line of high-end Star Trek figures. The line will see the arrival of one of the first Mirror U characters, with Spock.

Leonard Nimoy sported a beard for this portrayal of Mirror Universe Spock and EXO-6 has recreated that look in detail for this new 1/6 scale figure. Standing 12″ tall, every element — from his 23rd-century uniform to his Terran awards — is authentically reproduced.

As you can see, this figure is closely modeled after Spock’s appearance in the famed episode of the original series. He’s hand-painted, and sport a detailed, cloth uniform.

Spock is available right now for pre-order over at Sideshow Toys, and is set to ship out this spring (March through May, 2022). He’s priced in at $198 USD.

Jason's been knee deep in videogames since he was but a lad. Cutting his teeth on the pixely glory that was the Atari 2600, he's been hack'n'slashing and shoot'em'uping ever since. Mainly an FPS and action guy, Jason enjoys the occasional well crafted title from every genre.
@jason_tas
Previous Trailer: Antonio Carraro headlines the first DLC pack for Farming Simulator 2022
Next Trailer: Dead Man’s Diary tells a somber, post-apocalyptic tale