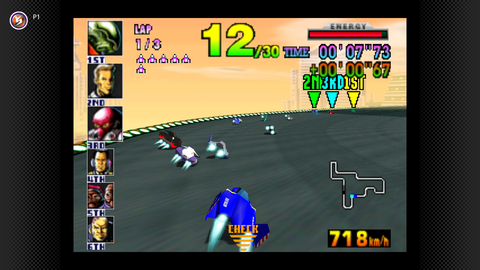 An N64 classic lands on Switch this week with F-Zero X. Is there a chance this might mean the racing series could make it’s long-awaited return?

The N64’s online corner of the Switch just got a lot better, thanks to F-Zero X. Seemingly forgotten, Nintendo’s futuristic hover-racing series is one that’s held well by both fans and critics. But even so, it hasn’t seen a new entry in years.

There are always rumors sparking up of its return, and this new addition to the Switch’s subscription service is likely to stoke those fires again. Should it? Probably not, since Nintendo doesn’t seem to have much love for it. Instead, it’s probably safer to assume that this is a nice new add-on for subscribers, and that’s it. If nothing else, that’ll save you from some disappointment.

As for what else is arriving this week, there ain’t much. Aztech Forgotten Gods sounds neat, And Chocobo GP adds more racing action, with a Final Fantasy theme. Scroll on down to see the rest.

Jason's been knee deep in videogames since he was but a lad. Cutting his teeth on the pixely glory that was the Atari 2600, he's been hack'n'slashing and shoot'em'uping ever since. Mainly an FPS and action guy, Jason enjoys the occasional well crafted title from every genre.
@jason_tas
Previous Marvel teases the return of one of its most powerful villains for The Defenders relaunch
Next Trailer: Young Souls knuckles up today on consoles and PC