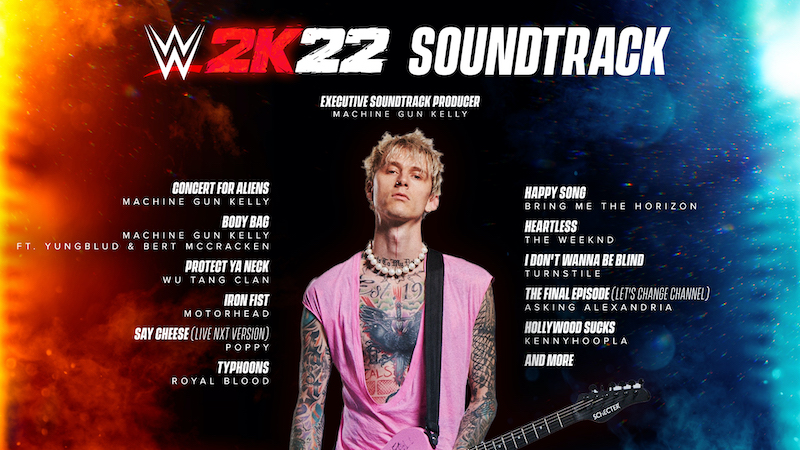 Singer and actor Machine Gun Kelly will indeed be bringing his talents to WWE 2K22 next month, but that’s not all. He’ll be a playable grappler too.

You might not think of Machine Gun Kelly when you first think of pro wrestling. The WWE and 2K Games would like to remind you though, that the personality has both appeared on WWE TV and played at several events for the company.

“Machine Gun Kelly has been an integral part of the WWE family for more than a decade including performances at WrestleMania and Tribute to the Troops, soundtracking our premium live events with his music, and making frequent storyline appearances on WWE programming over the years,” said Neil Lawi, Senior Vice President and General Manager, WWE Music Group. “He has curated a unique soundtrack for WWE 2K22 that includes not only his own music but a diverse array of artists from The Weeknd to KennyHoopla. The 12-track soundtrack is the perfect complement to this edition’s enhanced gameplay.”

Now Kelly is on his way to the video game version of the wrestling show, as both musical talent and an in-ring wrestler. Yes, you’ll be able to actually play as (and fight against) him in the ring.

As you saw in the above trailer, the OST will have more than just the headlining star. Along with Kelly, will be:

The WWE makes its long-awaited return to the video gaming universe, when WWE 2K22 lands on consoles and the PC on March 11th.

Jason's been knee deep in videogames since he was but a lad. Cutting his teeth on the pixely glory that was the Atari 2600, he's been hack'n'slashing and shoot'em'uping ever since. Mainly an FPS and action guy, Jason enjoys the occasional well crafted title from every genre.
@jason_tas
Previous Check out Mezco’s new “Golden Age” Batman vs Two-Face set
Next Nintendo Download: Frozen Floes and Fearsome Foes