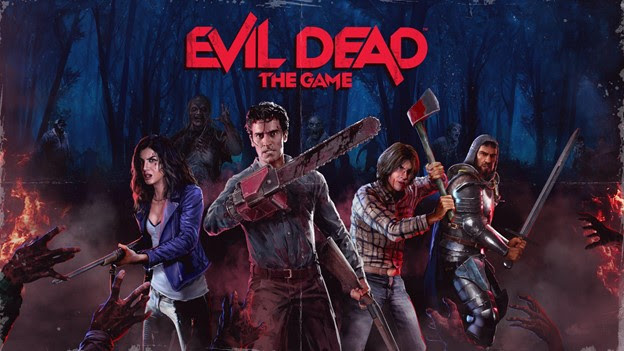 Home / News / Evil Dead: The Game dated, hitting consoles and PC in May

Evil Dead: The Game dated, hitting consoles and PC in May

The wait for the latest video game to star the classic, blood-soaked Evil Dead movie series is almost over. Evil Dead: The Game arrives in May.

How do you stop it?!

It’s finally on the way. Evil Dead: The Game is coming up, and set to hit consoles and the PC on May 13th. And with it, will come a massive love-letter to the iconic horror/comedy series.

But not only that, there are also some pre-order bonuses, as well as a pretty-packed collector’s edition.

Evil Dead: The Game brings the biggest characters from the franchise together in an over-the-top, gore-filled action experience against the forces of darkness. Work as a team of four survivors, including Ash, Kelly Maxwell, Pablo Simon Bolivar, Scotty, Lord Arthur and more, to kick Deadite butt and banish the vile Kandarian Demon. Or become the mighty Demon yourself, using your powers of possession to stop the good guys dead and swallow their souls! Discover fan-favorite sights from the franchise, battle with more than 25 hard-hitting weapons in multiplayer and the game’s bonus single-player missions, and level up a variety of skill trees to survive the night.

You saw them in the trailer above, but just to reiterate, both Ash Williams in his S-Mart Employee Outfit and his “Gallant Knight Outfit” are yours for pre-ordering Evil Dead: The Game. There are 2 different versions of that, with the standard clocking in at $39.99 USD, and the Deluxe Edition hitting $59.99 USD. The difference is that the Deluxe is packing season 1 of the post-launch DLC. That’s not been detailed as of yet, but you do get it at a discounted rate in the bundle.

Then there are the Collector’s Editions. Both are pretty beefy, with the same inclusions, outside of one pretty big bonus. The Ultimate Collector’s Edition actually included a life-size Book of the Dead. Yes, a full-scale prop, as seen in the movies. Oh, and I say included because it’s sold out. Yep, that one went pretty fast.

The second version is still up for pre-purchase though, and as I said is the same (sans prop).

Jason's been knee deep in videogames since he was but a lad. Cutting his teeth on the pixely glory that was the Atari 2600, he's been hack'n'slashing and shoot'em'uping ever since. Mainly an FPS and action guy, Jason enjoys the occasional well crafted title from every genre.
@jason_tas
Previous Trailer: Season 2’s gameplay detailed in new Call of Duty: Vanguard look
Next Trailer: Evil Genius 2 brings a frosty villain with new DLC