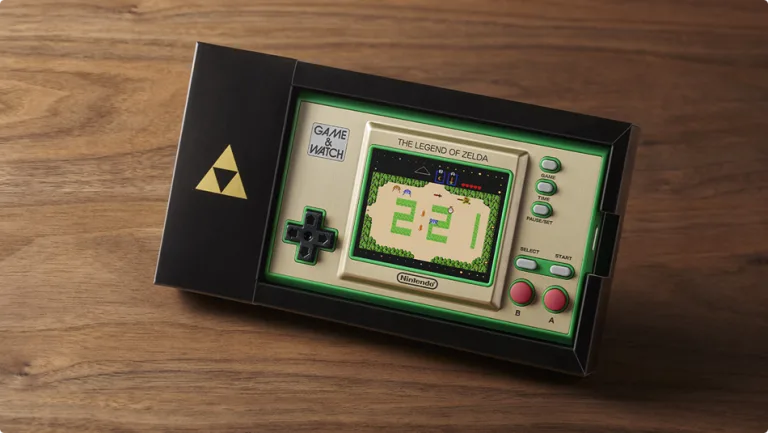 Game & Watch: The Legend of Zelda out now, includes 3 games and more

The second in what looks like it’s becoming a series for Nintendo, Game & Watch: The Legend of Zelda is out now and loaded up with Zelda classics.

Stamping out boredom as a nice little pack-in for any briefcase or backpack, Nintendo’s Game & Watch series has expanded again. This time it’s with The Legend of Zelda, and this newest handheld offers much more than last year’s model.

While the Super Mario Bros G&W was great, this one packs the original Legend of Zelda, Zelda II: The Adventure of Link, The Legend of Zelda: Link’s Awakening (the GameBoy version), a “playable” clock based on the original game, and an “interactive” timer based on Zelda II.

And being that this is Game & Watch, it’s also loaded up with a classic G&W title. This one’s a remake of Vermin, and places Link in the lead role, as he bops rogue Octoroks with his mallets.

The little portable is out right now, and seems a lot easier to find than last year’s edition. Then again, we’re still a month and a half from Christmas. So if you’re interested, maybe grab one while the grabbing’s good.

Tags Nintendo the legend of zelda

Jason's been knee deep in videogames since he was but a lad. Cutting his teeth on the pixely glory that was the Atari 2600, he's been hack'n'slashing and shoot'em'uping ever since. Mainly an FPS and action guy, Jason enjoys the occasional well crafted title from every genre.
@jason_tas
Previous Celebrate 30 years of red-symbiotes in Carnage Forever
Next HeroQuest is up for pre-order and shipping next month