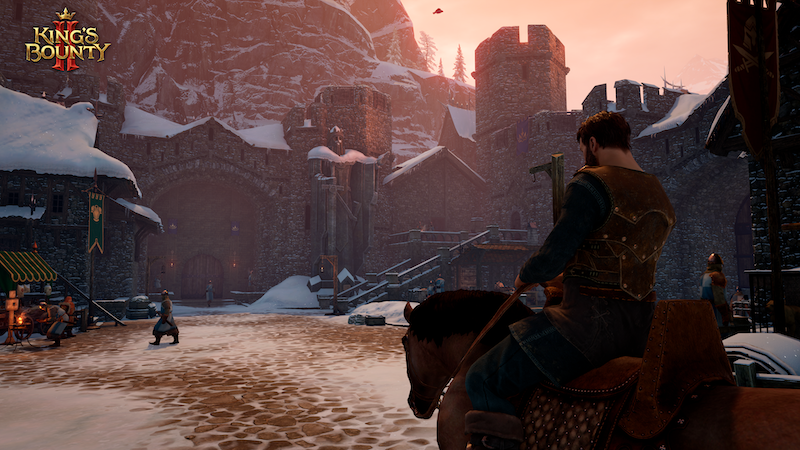 The classic series returns for a long-awaited sequel in King’s Bounty II, and delivers an original fantasy world to adventure and turn-based battle in.

As an admission, I have little to no concept of King’s Bounty. The original KB was released in 1990 for the PC, and apparently made it onto the Genesis as well. But even with a console port available (I had no PC), it wasn’t on my radar at the time.

King’s Bounty II though, almost immediately was. The game looked good from press releases, and seemed to offer up much of what I’ve always been into. That being a high-fantasy world, filled with knights, monsters, and quests to dig into.

And it’s definitely got all of that, along with a pretty great turn-based battle system, that I wasn’t expecting. Not that it’s perfect however. King’s Bounty II does have a decent amount of drawbacks, it’s just that they don’t outweigh the fun as far as I’m concerned.

From what I’ve read, the original King’s Bounty was a pretty straightforward fantasy romp. The game featured a quest that had the hero traveling across a large fantasy world to assemble a magical weapon and defeat the forces of evil. Not super unique there, but said hero also would gain money from defeating the enemies of the realm. These were the bounties that the name implies. Kinda neat.

The sequel carries over some of the themes of the original, though adds a significant amount to it. For starters, you get to choose between three characters, each with a different strength. Right off the bat this choice will either pay dividends or have you feeling the pinch, so the choice matters. Actually, a good deal of your choices matter.

Yes, you’ve no doubt heard that before, but one of the biggest components of KB2 is building up your forces as you quest. And just how you go about that will open up whole new avenues to you. Speaking of, so will exploration.

King’s Bounty II fosters digging about in its expansive world, and often rewards the curious. Sometimes this can be with whole new quests… and sometimes with a treasure chest or five. It depends. But the hunt for stuff was one of the most fun parts of the game for me, and I’m not usually one to travel off the main-questline in games like this. So take that from where it comes.

I will add as well, that the main storyline isn’t the most interesting of things. It had a generic feel to it, and that was odd since I had such a good time with the side-quests. For me though, it was the exploration, and the gameplay that drove the fun.

I thought I was going to hate the gameplay in King’s Bounty II, once I found out what it was actually like. I’m not a turn-based fan, and while I have enjoyed games in that genre I try to stay away from most.

As I mentioned above though, for some reason I thought this game was a real-time affair. Something more like The Elder Scrolls. But of course it isn’t. But even so, after some trial and error I had a really good time with it. Okay, maybe a lot of trial and error.

When you start out in King’s Road II, you get the choice of a hero. As someone who’s much more into the idea of swords than sorcery when it comes to games like this, I picked Aivar. That might not have been the easiest of choices though, especially once the combat started.

After a trip out of the castle dungeons (the start of the game’s narrative), I was given a cadre of men and some attack dogs. That’s your starter army. I then took off down the road and into some high adventure in the Kingdom of Nostria. Sort of.

After running into a stumbling block that wouldn’t have been if I played a magic-wielder, I took on a little side-quest. It was there that I ran into some bad guys who took out my army in what felt like one turn. That though, as I would come to realize, likely didn’t have to happen. There’s a lot to combat in King’s Bounty II, and if you don’t get the hang of it fast, you’re gonna get your clock cleaned. Oh, and once you lose all of your forces, that’s it. Keep that in mind.

Your character though, is a key to the battles. He or she can hang around on the outskirts of the fight, while the troops (and there are some awesome ones to recruit) take the fight to the enemy. But they’re not just lounging around, as they can use spells to sway the balance of battle.

You collect spells, and much more, from exploration and from winning fights. While the combat is turn-based, the game’s overmap isn’t. You’ll move through the world in 3D style, exploring some truly cool locales, and meeting some mostly decently-realized characters.

It’s kind of like 2 games in one, and 1C has done a good job melding them together.

Good looks, not such a great voice

Let’s start with the good in terms of the presentation, because King’s Bounty II looks pretty darn great. I loved the world that 1C built here.

The game’s universe is steeped in high-fantasy. The characters are all in that mold, and there are actually some interesting types and combinations that you don’t see all that often. When was the last time you were able to field undead next to human soldiers in a game? Pretty cool.

The landscape itself is dotted with castles, towns, graveyards, and more. And all of that is surrounded with a beautifully made natural world. But said world does suffer from the usual issues found in a game like this one.

For one thing, you will get stuck from time to time, and there are also odd places where I had trouble navigating. When it happens it is as annoying as ever, though it never broke the game for me.

While the looks of the game are mostly good, the sound is way more of a mixed bag. While the music is flat-out gorgeous, the voice work… isn’t. The acting is mediocre at best, and flat-out dull at worst.

At times it seemed as though the actors thought the words they were reading meant something other than what they do. Part of that has to do with the script of course, which isn’t great either, but I have to believe that good solid vocals would have helped that a lot.

Yes, there’s some picky stuff you can pluck at to see negatives in King’s Bounty II. But even so, it’s a very solid game overall, and it excels with it’s turn-based gameplay. Add to that, that the general graphics are very nice indeed, and you have a game that’s a fun time for any fan of high fantasy and strategic battles.

I’m actually thinking about double-dipping and grabbing a Switch copy to have on the go. That’s gotta say something.

Rough in parts, but fun

King's Bounty II is a really long time coming, and the first numbered sequel to the original title hits a good deal of the mark. It's good looking, and the gameplay is a ton of fun, split between turn-based combat and free exploration. On the flip side, the vocal work is subpar, there can be a bit of learning curve, and bugs (like getting stuck while exploring) are present. But if you can look past those negatives, there's a good time to be had in this kingdom.

Jason's been knee deep in videogames since he was but a lad. Cutting his teeth on the pixely glory that was the Atari 2600, he's been hack'n'slashing and shoot'em'uping ever since. Mainly an FPS and action guy, Jason enjoys the occasional well crafted title from every genre.
@jason_tas
Previous Go behind the scenes on Call of Duty: Vanguard’s score, plus pre-loading info is out
Next New dev diary digs into creating the perfect dino-park in Jurassic World Evolution 2