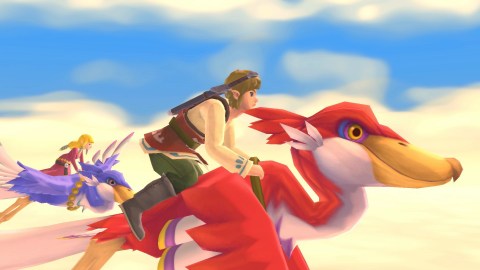 Legend of Zelda returns for Switch this week, with a remake of Skyward Sword. But if you’re looking for something else, you’re probably out of luck.

Look to the sky… ward. Sword.

Yes, it’s finally here. The Legend of Zelda: Skyward Sword is back and ready to roll into the HD era for the first time. Were you eagerly awaiting it’s launch, or did you shudder at the mere mention of the game’s title?

Personally, I had no idea, but apparently this little adventure is kind of divisive amongst Zelda fans. This new redux though, might just change that. After all, there have been a whole bunch of “quality of life” improvements. So if you weren’t too keen on Skyward Sword before, you might wanna have another look.

Aside from the new remake though, there isn’t much. Not that there aren’t a bunch of new games, because there are, but none of them are all that big-name. There is the promising Cris Tales, but that’s about it.

** NO PURCHASE NECESSARY. Void where prohibited. Open to legal residents of the United States, District of Columbia and Canada (excluding Quebec) who are 13 years old or older. Sweepstakes begins 10:00 AM PT on 6/22/2021 and ends at 11:59 PM PT on 7/20/2021. To enter, you must (1) have a Nintendo Account (if you do not have a Nintendo Account you can register for one at https://my.nintendo.com/); (2) visit https://my.nintendo.com/reward_categories/sweepstake; (3) sign in to your Nintendo Account; and (4) redeem 10 Platinum Points per entry at the My Nintendo™ Disgaea® 6: Defiance of Destiny Sweepstakes page (https://my.nintendo.com/rewards/dac1b0705c8e1634) as stated in Official Rules. There will be ten (10) winners. Each winner will receive one (1) Disgaea® 6 Cerberus plush (ARV $39.99 USD) and one (1) Disgaea® 6 Zed + Laharl metal art print signed by Mr. Sohei Niikawa (ARV $199.99 USD). Total ARV of all prizes: $2,399.80 USD. Odds of winning depend on number of eligible entries received. Details and restrictions apply. For Official Rules, visit https://nintendo.com/rules/my-nintendo-disgaea-6-sweepstakes. Sponsor: Nintendo of America Inc., 4600 150th Avenue NE, Redmond, WA 98052. NIS America is not a sponsor, co-sponsor or administrator of this sweepstakes.

Jason's been knee deep in videogames since he was but a lad. Cutting his teeth on the pixely glory that was the Atari 2600, he's been hack'n'slashing and shoot'em'uping ever since. Mainly an FPS and action guy, Jason enjoys the occasional well crafted title from every genre.
@jason_tas
Previous Trailer: Action Arcade Wrestling pinning consoles next month
Next Trailer: Streets of Rage 4’s Mr.X Nightmare and free DLC out now