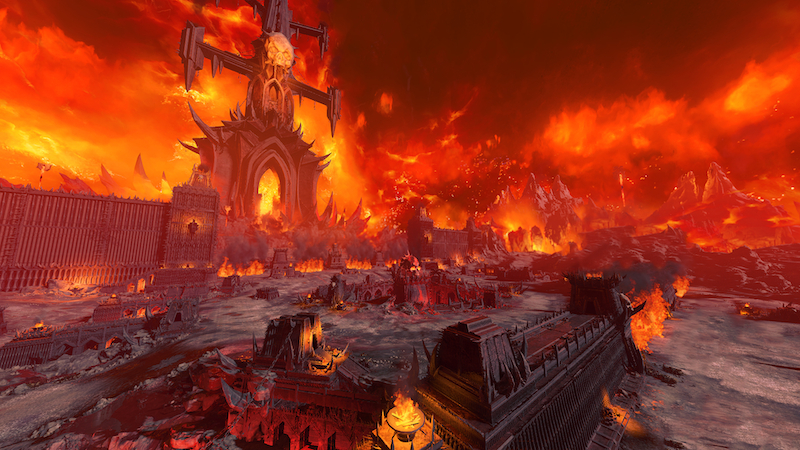 Blood for the blood god

Fire, torment, and fury, this is the realm of one of the Olde World’s most diabolical of daemons. Of course, I’m referring to Khorne. Whether you prefer to call the arch-foe the god of battle, the Blood God, or the Skulltaker, Khorne is no joke.

One of the key gods of Chaos, he’s a scourge of Warhammer’s fantasy world, and will play a big part in Total War: Warhammer III. That’s only fitting, since Khorne’s realm is the biggest (and hottest) Realm of Chaos.

Here’s a look at the vile god’s legions in action:

If you’re fixing to play Khorne’s armies in the newest iteration of Total War, then you’re fixing to get up close and personal with your foes. The daemon’s hordes mainly eschew magic, and instead prefer to go smash-mouth style, taking things into close quarters on the battlefield. Of course, as you can see in the trailer, that’s not true across the boards, as they do have ranged units as well.

Aside from the blood god though, there was also a bit of news on Total War: Warhammer III’s downloadable-content front last week. Namely, that Taurox The Brass Bull and his Beastmen will be returning alongside Oxyotl The Unseen and the Lizardmen. That will happen in the final Lord Pack of content, officially called The Silence and the Fury, set for release post-launch.

As for a release date for the base game, we don’t have one of those for you just yet. But you can expect to see Total War: Warhammer III on the PC some time soon.

Jason's been knee deep in videogames since he was but a lad. Cutting his teeth on the pixely glory that was the Atari 2600, he's been hack'n'slashing and shoot'em'uping ever since. Mainly an FPS and action guy, Jason enjoys the occasional well crafted title from every genre.
@jason_tas
Previous Logan’s Pokémon Card is a “Million-Dollar Card, Baby”
Next New imagery released for Batman: The Long Halloween