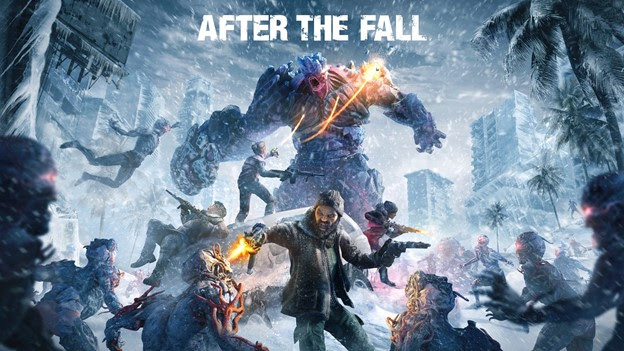 There is a lot happening in Vertigo Games’ After the Fall. For one thing, it’s the 80s (kinda), and there’s some kind of ice age. And zombies.

Mighty interesting, is the latest game from Vertigo, the folks behind Arizona Sunshine. Yes, it’s another zombie-themed title, but that’s the only similarity between this new game and Sunshine. For starters, After the Fall takes place in a world that’s been frozen in time. Literally.

Taking place in 2004 Los Angles, 20 years “after the fall”, we find that the world is encased in ice. But that’s not all, as there are zombies and other horrors roaming the once-familiar city.

It’s up to you and 3 others to take on this nightmare, in 4-player co-op play. And VR. Can’t forget that.

“Since the early concept phase, After the Fall has been all about having VR gamers team up together, regardless of the device they play on, through full cross-platform multiplayer functionality. In a time of widespread social isolation it feels like that goal now has additional relevance,” said Richard Stitselaar, Studio Director at Vertigo Games. “We’re truly excited about moving into this next campaign phase, in which we’ll be inviting more players into the game and sharing more details as we gear up towards launch.”

Landing on PSVR, PC virtual reality platforms, and “to be announced VR platforms”, After the Fall is set to sink its teeth into retail some time this summer.

Jason's been knee deep in videogames since he was but a lad. Cutting his teeth on the pixely glory that was the Atari 2600, he's been hack'n'slashing and shoot'em'uping ever since. Mainly an FPS and action guy, Jason enjoys the occasional well crafted title from every genre.
@jason_tas
Previous NBA 2K21 makes a full-court press to Xbox’ Game Pass
Next Mountains of Madness brings back old school adventure-gaming