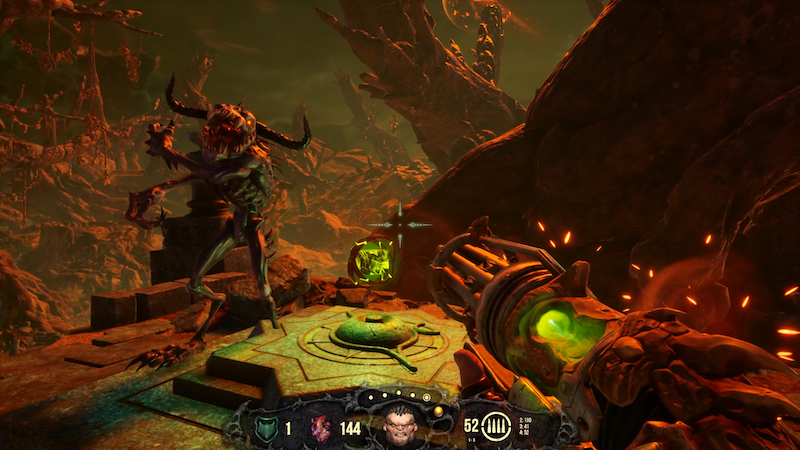 When is a trip through hell not… doomed? When it’s Hellbound. An FPS made with 90s flair, Hellbound recalls FPS classics in more ways than one.

Have you heard of Doom? And by that, I mean any version of Doom that’s not Doom 3. If you have, then you already have the gist of Hellbound.

From developer Saibot Studios and Nimble Giant, Hellbound is an unapologetic callback to the golden age of PC shooters. You know the ones, I’m talking about the games of the 90s that were fast and unforgiving. Saibot Studios specifically points to Doom and Quake as their inspiration, but Hellbound is way more Doom than Quake. And for that matter, it’s got a bit of the Doom (2016) reboot in there too (but not too much).

You’ll see what I mean, but keep in mind that I mean no part of that in the negative. Hellbound is fun, fast, and loaded with enough action appease almost any FPS fan who remembers the classics.

The story is light here, and it’s kept that way on purpose. That’s part of Hellbound’s nostalgic bent, and leaves almost all of the story elements to simple text on loading screens and a few voiceovers. But nevertheless, what there is of the story might sound pretty familiar. Okay massively familiar.

Mainly, it seems that a long, long time ago, there was an alien race. And this alien race came into contact with a cadre of inter-dimensional ‘demons’. Things went very bad from there, leading to the physically-imposing alien race being all but wiped out by said demonic incursion.

Now fast-forward to the age of man. Humans discover a way to teleport into what’s more or less become hell. There they find plenty of demons who wage war on Earth, but they also find the remnants of one badass alien. The humans clone him, and when they do he comes back, memories and all. Now, other than the cloning bit, that’s… yeah, you’ve heard that before if you’re a big FPS fan.

This is probably my biggest complaint about Hellbound. It seems like there was next to nothing put into the story for the game. With so much of everything else being so good (you’ll see), and having surprising amounts of personality, that’s frustrating.

In any event though, the story then sends you through the portal to the shores of hell as the massive Hellgore, the main character. Your mission? Kill everything in front of you, destroy the pillars of hell that allow teleportation, and revive your race.

So the premise (and narrative) is all old school. But what about the gameplay? Yep. Same. Hellbound’s gameplay should be instantly recognizable to anyone who’s ever played an FPS.

Move, shoot everything, find keys to open doors and progress… that’s the gameplay in a nutshell. Now there is more to it, including alt-fire modes for the arsenal and a little melee combat, but the main bulk of Hellbound’s play is shoot, shoot, shoot… and then shoot some more. The best way to get power-ups and health replenishment? Shoot the corpses of your fallen foes to bloody chunks. And if you think I’m complaining about any of that, think again.

I love classic-style FPS’ to death, so much so that I still play 90s gems like Quake II, Duke 3D, and Doom (in all of its forms) all of the time. Even retro-style FPS’ like those from 3D Realms get a significant amount of play from me. That’s not to say that this game should be considered in the same realm as those however. I’ll explain what I mean in the next section.

But before we move on to that, I have to mention that Hellbound’s difficulty is also decidedly old school. Yes Hellbound is pretty tough on every difficulty level, maybe sans the easiest.

If you’re not accustomed to saving all the time, like you would have playing a 90s FPS, then you’d best get accustomed to it. There’s no refilling health here, pick-ups are scarce, and the bad guys like to charge you. Yep, old school.

This is Hellbound’s biggest change from the era that it plays off of, and the singular reason why it shouldn’t be included in with ‘retro games’. What I was alluding to above is that Hellbound looks kind of awesome. And I mean that in the modern sense.

The game’s graphics aren’t quite up there with the best FPS’ in the genre, but make no mistake, they’re terrific. Hellbound’s vision of hell is just as familiar as some others that you’ve seen, but the way that Saibot crafted it is really cool.

I don’t want to call it cartoony, because it’s not quite that, but there’s a more cartoony edge to it than with some other games. Maybe ‘comic-booky’ is more appropriate, but whatever it is I dig it big time.

That’s overall. As for the enemies specifically, they’re done in the same style (natch’), and like everything else should bring back some memories of other gaming universes. There are zombie soldiers, fire-tossing demons, and charging terrors that are more head than anything else.

As for the music, it’s exactly what you think it is. Mostly not that memorable, but plenty metal. I did however, really like the vocal work, so I want to make special mention of that.

Yes, Hellbound has given Hellgore a voice, though it’s heard quite sparsely. Actor Artie Widgery’s heavy, macho tones fits the character perfectly, as he chews up his lines and spits them out at the demon horde. It lends itself to the over-the-top feel of the game supremely well.

If you’re a PC gaming FPS fan who fondly remembers the 90s, Hellbound is one to check out. It won’t reinvent any part of the wheel, but it’s got plenty of ammo where it counts, looks terrific, and is a ton of fun to play.

Honestly, what else do you need?

A call back to the FPS heyday that was the 1990s, Hellbound is everything that a retro shooter should be, except for the fact that it sports some impressive visuals. If you dig that fast, at-times frantic gameplay of the classics though, you should dig this.

Jason's been knee deep in videogames since he was but a lad. Cutting his teeth on the pixely glory that was the Atari 2600, he's been hack'n'slashing and shoot'em'uping ever since. Mainly an FPS and action guy, Jason enjoys the occasional well crafted title from every genre.
@jason_tas
Previous New Venom Marvel Legends wave coming up, hits in November
Next Four bonus freebies posted to Amazon’s Prime Gaming