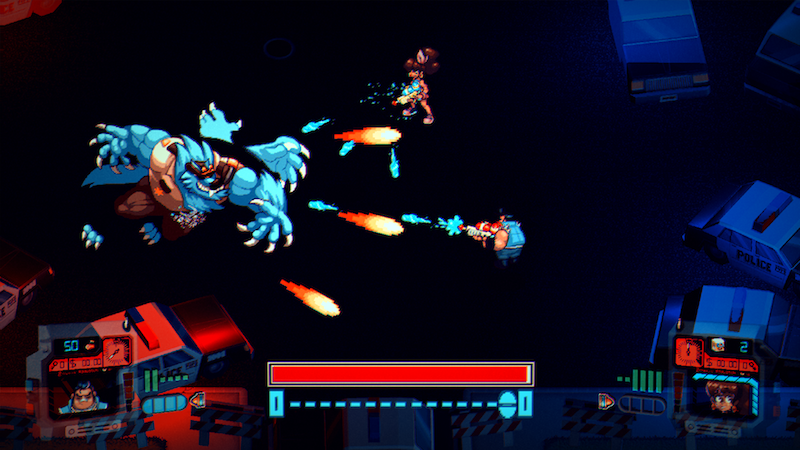 Home / News / Demons Ate My Neighbors! taking a bite out of the Switch

While not an official sequel to the game you’re thinking of, Demons Ate My Neighbors! is nonetheless looking like a terrific homage to that 16bit classic.

If you know the game I’m talking about, then you have a handle on what Demons Ate My Neighbors! is all about. If not, well it’s pretty simple – Demons is an isometric twin-stick shooter with 16bit-era looks and sound.

Demons has some pretty unique angles though, including the fact that you’ll have to douse your possessed neighbors with holy water to save them. Yeah, that’s pretty cool.

When a cursed VHS tape transforms Fairweather Valley into a den of horrors, April and Joey forgo their dreams of laid-back summer. Join them as they load their Splasha squirt guns with holy water and save the innocent citizens still left alive!

Bring a pal, pump up those Splashas and romp through neighborhoods filled with Vampunks, Zombos, and other creeps inspired by classic horror films. Choose to DAMN or DELIVER citizens and bosses who turned evil with either lethal or non-lethal homemade weapons, then discover different paths and equipment based on choices.

Pumped to blast some demons? Demons Ate My Neighbors! is set to arrive on the Switch some time this fall.

Jason's been knee deep in videogames since he was but a lad. Cutting his teeth on the pixely glory that was the Atari 2600, he's been hack'n'slashing and shoot'em'uping ever since. Mainly an FPS and action guy, Jason enjoys the occasional well crafted title from every genre.
@jason_tas
Previous Tony Hawk’s Pro Skater ‘Warehouse’ demo hitting this Friday
Next AtGames’ Legends Ultimate arcade machine gets a second run