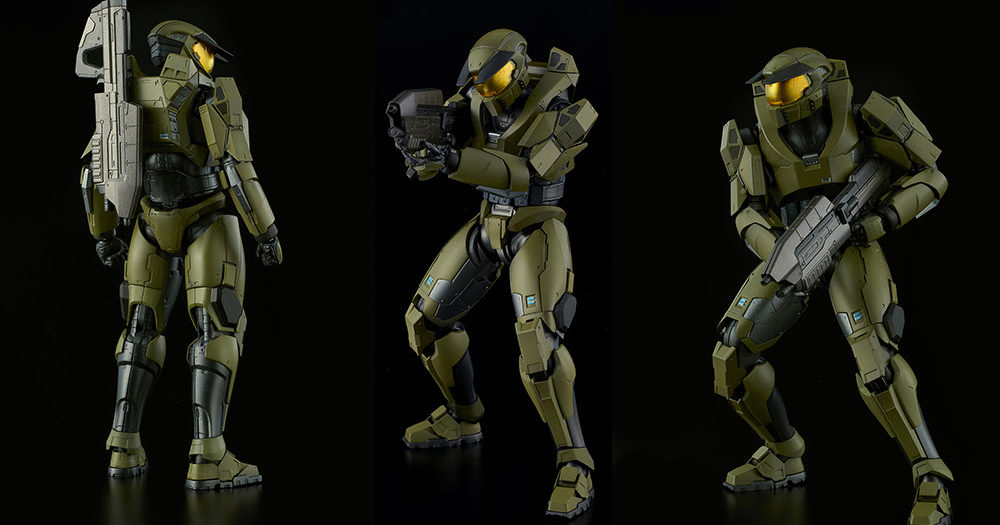 Halo Infinite is a ways off, but there’s a new figure for Master Chief coming from 1000toys just a bit sooner. And he’s sporting a sleek new look.

It’s kind of funny how Halo bounces around as a license. Most recently moving from McFarlane to Hasbro, the master toy license has now been shifted to Wicked Cool Toys. That’s the “master” though. Aside from that, there are lots of lesser known items produced with the brand attached. This is one of those.

1000toys is fast becoming known as a premium collector company. Now they’ll be known for making one of the most interesting looking Master Chief’s probably ever. Check out the Previews-exclusive Master Chief Mjolnir Mark V figure.

Designed by Izmo Juki, this is a much more streamlined Chief. Gone is the iconically bulky UNSC armor that the Chief wore back in Combat Evolved. In its place is something a little more agile-looking.

Starting with the iconic MJOLNIR Mark V armor featured in the classic Halo: Combat Evolved game, famed mecha designer Izmo Juki has taken the original design of the legendary Spartan super-soldier known as the Master Chief and refined it with his trademark touch. The PREVIEWS Exclusive Master Chief Mjolnir Mark V figure from 1000toys includes two M6D Pistols and an iconic MA5B Assault Rifle, along with a Covenant Energy Sword to cut through anything within reach! The exterior armor pieces are constructed in ABS plastic while the die cast inner frame provides an overall improved integrity and excellent articulation for the collectible while retaining battle-ready stiffness in the joints.

Note this is a Previews exclusive, so the Chief will only be found at specialty and comic shops. He’ll start shipping out on April 29th, 2020 and will run you $129.99 USD.

Jason's been knee deep in videogames since he was but a lad. Cutting his teeth on the pixely glory that was the Atari 2600, he's been hack'n'slashing and shoot'em'uping ever since. Mainly an FPS and action guy, Jason enjoys the occasional well crafted title from every genre.
@jason_tas
Previous Host of improvements come to Wolfenstein Youngblood with pair of patches
Next Marvel teases a return to Venom Island