No, you didn’t read that wrong, two of the Fantastic Four’s greatest threats are going head to head with Reed Richards caught in the middle.

Doctor Doom is, more or less, one of the most powerful baddies in the Marvel U. And I think it’s safe to include Galactus in that argument, as powerful as he is. Yes, the cosmic god actually eats worlds, but now he’s up against Doom. And Doom is… Doom.

Victor Von Doom is kind of like the Batman of super villains. He’s going to find a way to beat you. And of course, all of this evil v evil action leaves one Reed Richards in a very bad spot. 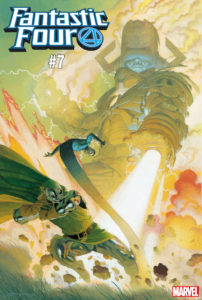 One is an unstoppable cosmic force of nature. The other is a complicated villain. And both are iconic foes of the Fantastic Four, coming to the pages of FANTASTIC FOUR #7 this February!

It’s a battle between Galactus and Doctor Doom, and Marvel is excited to reveal their epic clash with a brand new cover from series artist Esad Ribic! With the Devourer of Worlds versus Victor Von Doom, Mister Fantastic’s got a choice to make as the Fantastic Four fight to keep the Marvel Universe safe – but one thing that the Fantastic Four haven’t counted on? They return of a long forgotten threat from the team’s past…

This winter, the “Herald of Doom” continues…and it’s a story fans won’t want to miss!

Jason's been knee deep in videogames since he was but a lad. Cutting his teeth on the pixely glory that was the Atari 2600, he's been hack'n'slashing and shoot'em'uping ever since. Mainly an FPS and action guy, Jason enjoys the occasional well crafted title from every genre.
@jason_tas
Previous LEGO DC Super Villains Aquaman content arrives next week
Next Take a deep dive in the underwater adventure Abzu, now on Switch