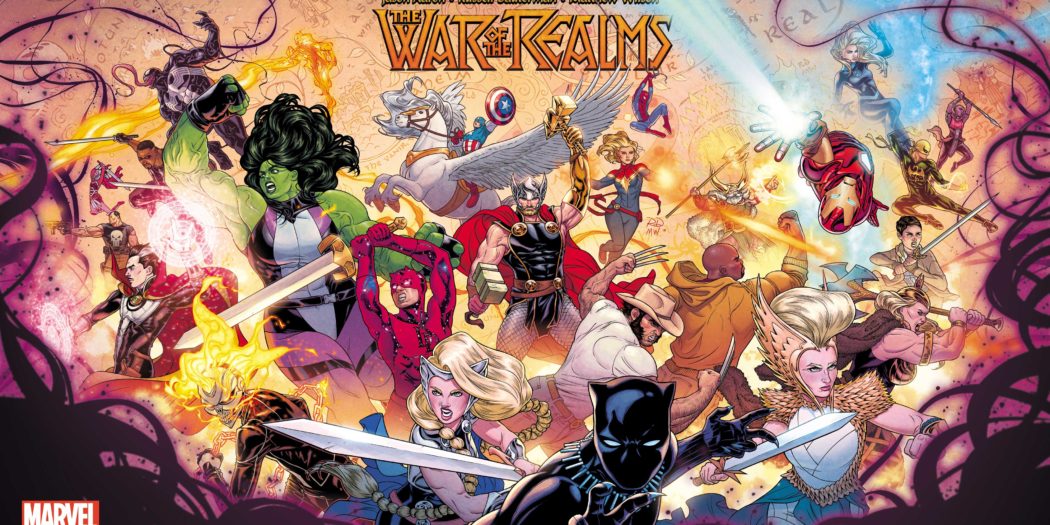 There’s a war raging across the Ten Realms, and it’s about to spill into midgard. War of the Realms comes to the Marvel Universe in 2019.

Now this is an event book that I can get behind. While the premise is cool enough, I love the execution. War of the Realms is set to play out over six issues… and last for three months. This is no year-long arc and I love that.

I also love that Marvel is saying the series will include all their biggest characters. That’s nice to see, and has to remind longtime fans of classic Marvel mini’s where all the big guns came out to play.

While we don’t know too much about the story just yet, we can tell you that War of the Realms is scheduled to launch in April of 2019.

This April, the war that has exploded across the Ten Realms finally blasts into the last realm standing…ours.

WAR OF THE REALMS IS COMING!

Starting in April, the award-winning creative team of Jason Aaron, Russell Dauterman and Matthew Wilson will usher in an event of unparalleled scale! And like the mega-event Secret Wars, no corner of the Marvel Universe will be untouched!

“I have been building towards WAR OF THE REALMS for the entire duration of my Thor run. So we’re talking six years and 80-something issues and counting,” teased Jason Aaron. “This is a war that covers the entire globe and involves the biggest heroes of the Marvel Universe, as you can see in this amazing promo piece by my MIGHTY THOR collaborators, Russell Dauterman and Matthew Wilson, who I’m so thrilled to be working with again on WAR OF THE REALMS.”

For more about War of the Realms, check out Earth’s Mightiest Show on Marvel.com, and stay tuned for more information to come!

Jason's been knee deep in videogames since he was but a lad. Cutting his teeth on the pixely glory that was the Atari 2600, he's been hack'n'slashing and shoot'em'uping ever since. Mainly an FPS and action guy, Jason enjoys the occasional well crafted title from every genre.
@jason_tas
Previous Sunset Overdrive coming to PC, complete with boxed retail edition
Next Roller Coaster Tycoon Adventures brings park management to Switch