The 700th issue of Marvel’s Avengers comic is going to be a big one. The publisher let a few cats out of the bag this week, including that David Finch will be providing the cover.

There’s no rest for the heroes who protect Earth…not even when it comes to the Avengers! Earth’s Mightiest Heroes will find themselves facing some of their harshest battles yet – including Namor’s fearsome new Defenders of the Deep and the reimagined Russian Super-Soldiers of the Winter Guard! 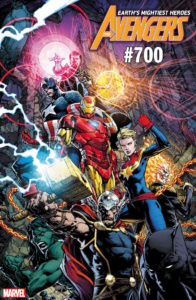 It’s an issue fans won’t want to miss, as the mystery of the 1M BC Avengers continues! Plus, an intriguing and important surprise about Wolverine’s return is revealed…as well as one brand-new Avenger! It all happens in AVENGERS #700, arriving in local comic shops this November!

That is a lot to unpack. Not only is Avengers hitting the milestone of 700 (legacy) issues, but it’s also going to have Atlanteans, Russian super-soldiers, a new team member, more about the ancient avengers, and something with Wolverine. That’s one big pile of content.

All of it sounds cool too, with the possible exception of the 1M BC team. Does anyone still care about that? It seems to me that the whole storyline should have been put to bed long ago. But that’s me. Maybe you’re into it?

Whether you are or not, the book is landing on the racks on November 14th, and it’s bringing the sweet David Finch cover that you see here with it.

Jason's been knee deep in videogames since he was but a lad. Cutting his teeth on the pixely glory that was the Atari 2600, he's been hack'n'slashing and shoot'em'uping ever since. Mainly an FPS and action guy, Jason enjoys the occasional well crafted title from every genre.
@jason_tas
Previous Dynamite Comics launches Giclée print line, arriving just after the Holidays
Next TNT announces all-day Supernatural marathon for Halloween