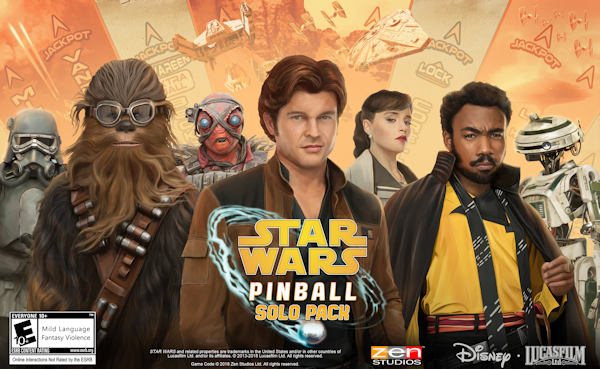 This past spring’s Solo: A Star Wars Story film is about to get in on Zen Studios’ pinball action. A table is landing for Pinball FX3 next month.

While this pack is “Solo” branded, there is definitely more than one new table included in the bundle. There are three actually. The first all about Solo, while the second stars Lando. The last one? That’s all about the Mimban conflict.

Ready to play? The pack arrives on September 12th for just about every platform’s version of Pinball FX

Jason's been knee deep in videogames since he was but a lad. Cutting his teeth on the pixely glory that was the Atari 2600, he's been hack'n'slashing and shoot'em'uping ever since. Mainly an FPS and action guy, Jason enjoys the occasional well crafted title from every genre.
@jason_tas
Previous Hot Takes and Raw Emotion: The First Three Hours with Morphies Law
Next Luigi’s Mansion scares up a release date for 3DS, haunts the console October