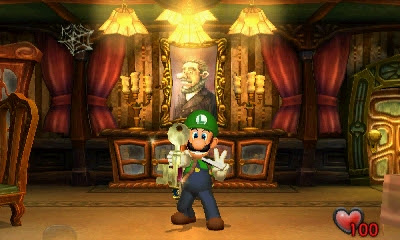 Luigi’s Mansion scares up a release date for 3DS, haunts the console October

The 3DS port of Luigi’s Mansion is coming up fast, with a freshly announced October release date. Better get those vacuum cleaners ready.

Who can forget Luigi’s Mansion? The GameCube classic introduced gamers to the Poltergust 3000, Luigi’s ghostbusting gadget. It’s also one of the few games from Nintendo to actually star Mario’s bro. That’s a real rarity. And of course, the gameplay in LM was about as far away from traditional Super Mario gameplay as possible.

If you’re in the dark on it though, Luigi’s Mansion is basically Super Mario x Ghostbusters. Luigi uses a modified vacuum cleaner to bust spooks in a Ghost House, while searching for his brother. The game was different and pretty fun honestly. And it even spawned a 3DS-exclusive sequel.

Coincidently, this remake of the original is also on the 3DS. That’s nice to see since the dedicated handheld hasn’t seen much love as of late. Though I also have to admit I’d have rather seen it on the Switch, so I could play it on my TV. Oh well.

There are a few differences this time around however, that take advantage of the portable hardware. The game will have a map feature that will be interactive via the 3DS’ touchscreen, and a Gallery Battle Mode. There you’ll be able to fight against just the bosses… once you’ve beaten them in the campaign.

Honestly, if you haven’t played Luigi’s Mansion before, then this is worth your time. It’s a fun riff on the classic Ghost Houses of SMB, and a very different way to experience the Mushroom Kingdom. Watch for it to hit the 3DS on October 12th.

Jason's been knee deep in videogames since he was but a lad. Cutting his teeth on the pixely glory that was the Atari 2600, he's been hack'n'slashing and shoot'em'uping ever since. Mainly an FPS and action guy, Jason enjoys the occasional well crafted title from every genre.
@jason_tas
Previous Zen adds Star Wars “Solo” table to Pinball FX3 next month
Next Beta dates announced for Xbox One and PC versions of Call of Duty: Black Ops 4