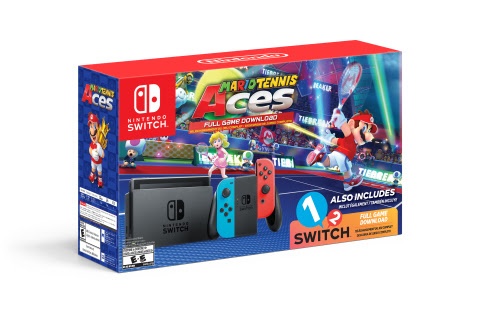 Just in time for a little early holiday shopping, Nintendo has announced a Switch bundled with the big Mario game of 2018 – Mario Aces.

It’s a little weird to actually type that, but Mario Aces is the big Mario game of the year. Yeah, this year wasn’t exactly the heyday of 2017 for the Italian plumber from Brooklyn. Mario Aces wasn’t a bad game though, as far as Mario sports titles go. We reviewed it here and gave it a respectable 73%. If you skipped it though… actually if you skipped the Switch all together, then you might be into what Nintendo has cooked up here.

The company has announced a Switch bundle that includes the console and aforementioned tennis title, exclusively on sale at Walmart. The set includes both that and a copy of 1-2-Switch, with both games in the form of digital downloads. The cost is $359.99 USD, which is about fifty bones over the regular price tag. So you’re getting one of the games for free, not too bad.

The Aces Switch bundle will be available starting on September 5th, so it’s right in that opening window for Holiday purchases. No word on just how limited it might be, but I’m sure you can expect to see it hanging around at Wally World for a bit.

Jason's been knee deep in videogames since he was but a lad. Cutting his teeth on the pixely glory that was the Atari 2600, he's been hack'n'slashing and shoot'em'uping ever since. Mainly an FPS and action guy, Jason enjoys the occasional well crafted title from every genre.
@jason_tas
Previous Ragnarok arrives in Rune, a new open-world viking RPG coming to PC
Next Marvel launches “Decades Collection” for 2019