EVERSPACE may, in fact, be the most hidden of gems.

Jumping Across The Universe

For those not in the know, EVERSPACE is a rogue-like space shooter. The gameplay focuses on collecting resources, adrenaline-fuelled dogfighting, and upgrading your ship’s abilities over multiple runs.

In many ways, the game reminds me of indie-darling FTL: Faster Than Light with its path-charting and system-hopping exploration. After tense battles with multiple enemy fighters, the game gives way to exploring beautiful sectors of space you inhabit.

I loved the narratives that popped after finding the husk of once mighty vessels, or tense decision about whether to turn pirate and attack resource-laden colonial ships. EVERSPACE blends these elements to near perfection. More often than not, your runs will involve both combat and exploration before you must inevitably outrun the Okkar forces on your trail. 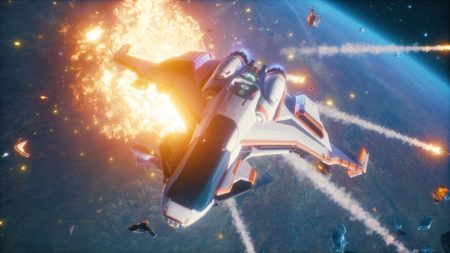 EVERSPACE, by the way, you’ll die a lot. But that’ll change as you understand more of what makes this title tick. By upgrading ships, overcoming new hurdles, and discovering new tricks,  you’ll notice your runs last longer and longer. You’ll explore new horizons as you jump to a new part of the galaxy on your quest for personal identity.

EVERSPACE begins with a brief introduction to your player character, briefly explaining exactly why he’s jumping from sector to sector. You play as Adam Roslin, a man on the run from the alien Okkar forces who have infected him with an unknown virus.

Barely escaping their clutches, Adam steals a ship from the Okkar hangar and begins a galaxy-wide game of cat-and-mouse. More of the circumstances and mystery surrounding his backstory reveal themselves during gameplay as you clear sectors. The only company you’ll keep during the game will be an onboard ship AI, who serves as both mentor and sidekick to Adam. 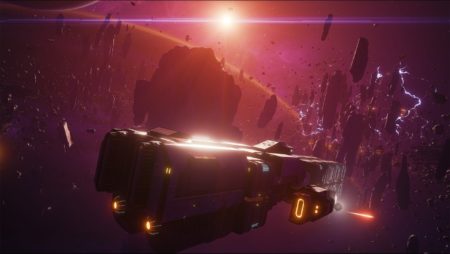 The back-and-forth quips between these two become incredibly entertaining as you play more of the game. They also fill in a vitally necessary role of characterizing the universe which you inhabit. Their conversations flesh out the galaxy’s conflicts, infrastructure, and factions to a level the player may understand.

Along with the seemingly-endless conversations, the story presents interesting twists as your runs last longer and longer. No spoilers here – but bear in mind that I enjoyed the light-touch narrative in Everspace immensely. The PS4 port retains all of the elements the original PC version possessed.

In terms of what was changed for the PS4 port of the game, the graphical quality has been scaled back from the breathtaking bar of the PC version. EVERSPACE is still pretty, however, despite the downscaled look.

The universe still remains a fun setting for you to explore. What I appreciated more than anything was the surprisingly-steady framerate. The developers prioritized retaining as close to seamless 60 fps gameplay as possible. Slowdown did occur during intense combat, due to a multitude of particle effects flying across the screen. Despite that small annoyance, I was relatively happy with how smooth my time flying across the galaxy remained in the PS4 port. 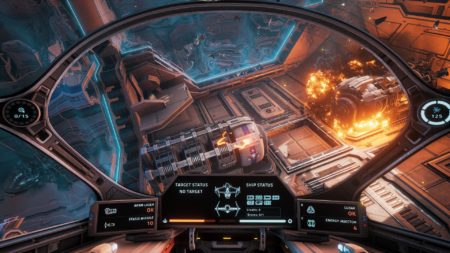 What threw me off personally were the controls for flying around with the Dualshock controller. Instead of adopting controls akin to a racing game, the PS4 version of EVERSPACE made controlling your ship as wonky as possible.

R2 and R1 are used for acceleration and deceleration, while the left stick moves your ship vertically and horizontally across the playable space. The right stick changes your ship’s pitch and yaw. Even 10 hours into the game, I was still having issues getting these controls down. It’s not nearly as intuitive as the PC version, and one of the only negative criticisms I can levy here.

Despite control issues and a pile of frustrating deaths, the PS4 port of EVERSPACE remains as uniquely captivating as the PC version. Even today, I can’t seem to put it down and spend a lot of spare time playing the game. Exploring sectors, progressing across runs for credits, and unlocking abilities are great for winding down after a hard day.

For those fans of sci-fi and space in general, EVERSPACE scratches the long-needed itch of a dog-fighting focused space sim. I love tangling with Okkar fighters and pirates. The simple-yet-challenging omnidirectional style of dogfighting remained fun throughout my time with the game. I constantly kept a lookout for places to explore until last-minute Okkar incursions forced me to jump to different sectors. With the proposed price of $30,  EVERSPACE absolutely deserves a place in your library. 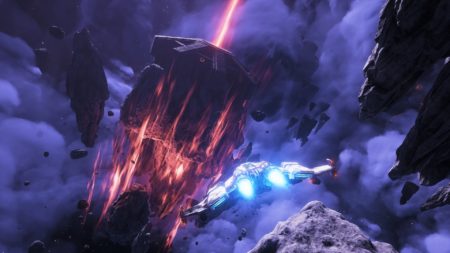 Mike Allio is a writer from the Greater San Francisco Bay Area in California. He's a passionate creative, and when he's not writing he loves playing video games. Some of his favorite series have darker tones to them - Dark Souls, Bloodborne, and Mass Effect are just a few of his favorites. Check him out on Twitch.tv/adaywalker, and follow his Twitter handle @TheMikeatNite to learn what he's up to.
@TheMikeatNite
Previous Pocket Rumble is Finally Coming Soon
Next E3 2018: Megan’s Top 5 Games of the Show