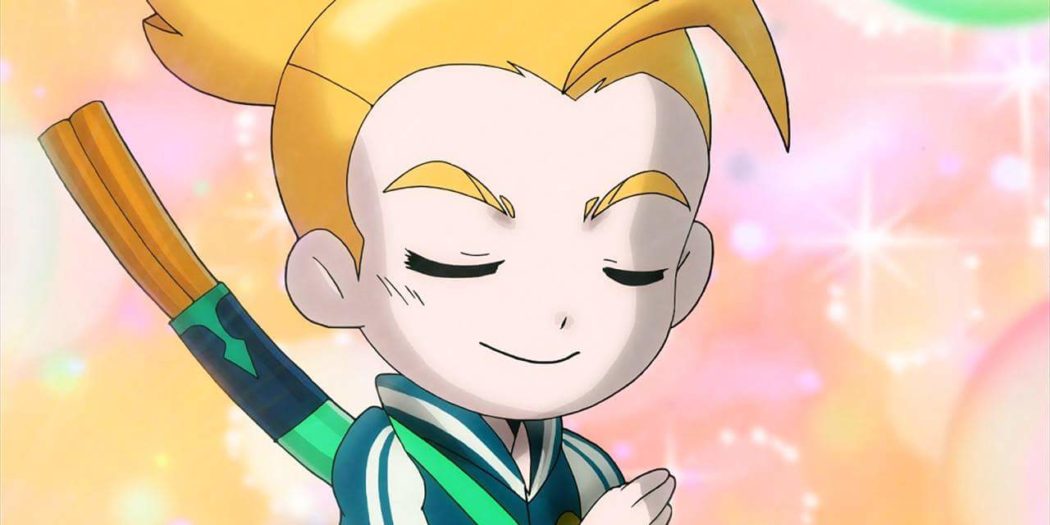 Sushi Striker: The Way of Sushido (Switch) Review — A Taste Worth Savoring

Sushi Striker: The Way of Sushido, the brand new puzzle game published by Nintendo (and co-developed by the studio behind Final Fantasy Theatrythm), is puzzling in all the best ways.

Sushi Striker: The Way of Sushido on the Nintendo Switch and Nintendo 3DS is as strange as they come.  You play as Musashi, a hungry orphan who discovers sushi, which has been banned across the world by the incorrigible empire. The empire would use sushi for dominance. Because sushi isn’t just food- “Sushi Sprites” bond with “Sushi Strikers” to grant them power when they eat sushi. Like a ninja throws kunai, a sushi striker throws his plates after he finishes eating his sushi. Freeing the people from the clutches of the empire and allowing everyone the chance to enjoy sushi is your ultimate goal.

The story of this puzzle game is the real deal. Animated cutscenes pair with major story beats, and a full cast of bizarre characters all have different relationships with sushi for you to discover. The voice acting here is well done, considering the bizarre material, helping you to grow attached to Jinbei, Musashi, and the rest. 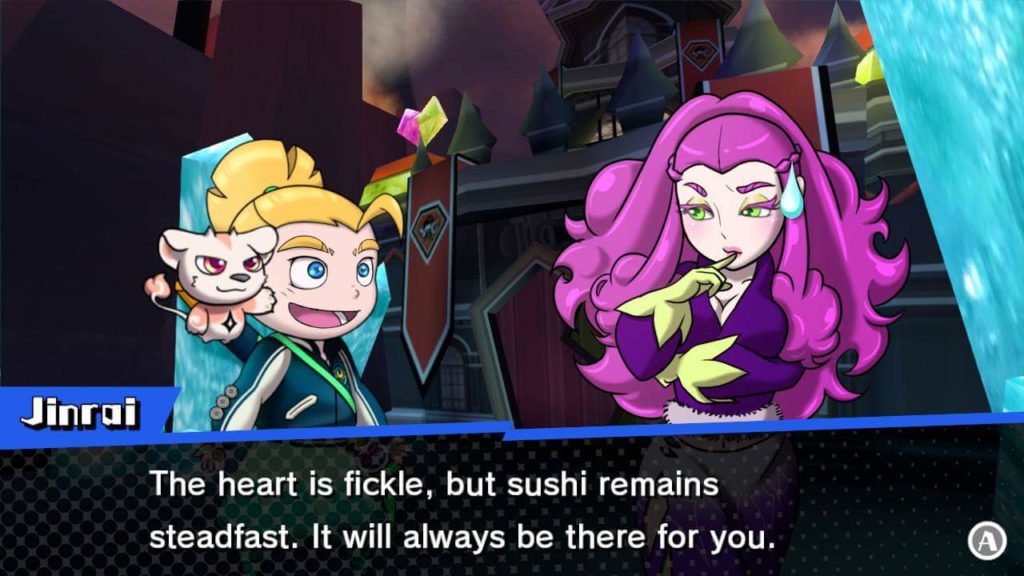 The story has genuinely funny moments, and often. It plays up the melodrama of people fighting over sushi, with sushi, as something to poke fun at, and never to take seriously. Ridiculous facial expressions, animated eye-twinkles, and the lines themselves (“Sushi remains steadfast. It will always be there for you”) know exactly what kind of game this is.

Sushi Striker: The Way of Sushido is an action-puzzle game in which you face off against an opponent. Each of you have three lanes of sushi (and one shared lane) crossing your screen, carrying colored plates of different kinds of sushi.  By using either touch screen or button controls, you must match same-colored sushi within seven seconds. This becomes a stack of plates that waits on your table for when you’re ready to throw it. The more plates you’ve matched, the taller your tower and the more damage it deals. 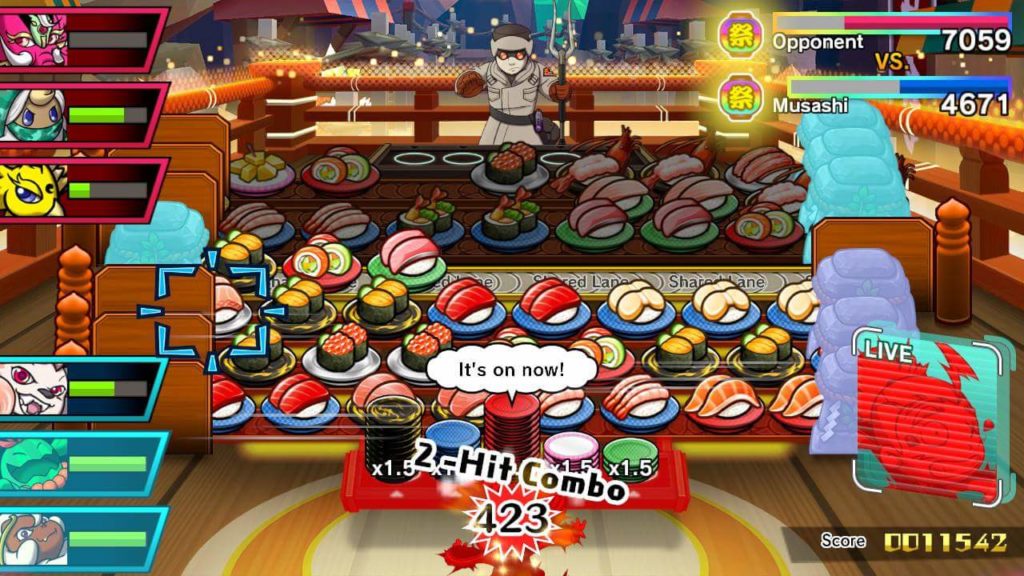 It gets pretty deep. Damage increases as you combo same-colored stacks. Damage also increases if you match a stack of the same sushi type. You’re rewarded for paying attention to what you’re eating.

Sushi Sprites make things even more complicated. Each player brings in three Sushi Sprites, each one providing a different line-up of sushi plates. Each one also provides a unique ability that is loaded up by eating sushi.  The abilities are match defining. You can break plates, steal plates, dodge plates, prevent abilities from being used, improve the quality of sushi in your lanes, and more. Overall, there’s a Pokemon number of these Sushi Sprites, and each one levels up (many of them evolve), improving the quality of its sushi over time.

Originally, I selected my team of Sushi Sprites based on their abilities- usually to counter specific enemy line-ups.  However, nearer the end of the game, I realized it was far more valuable to ensure matching plate line-ups. Ultimately, I ended up with three sprites with a huge number of red plate options, allowing me to focus on only one color, building combos and huge stacks with little effort. 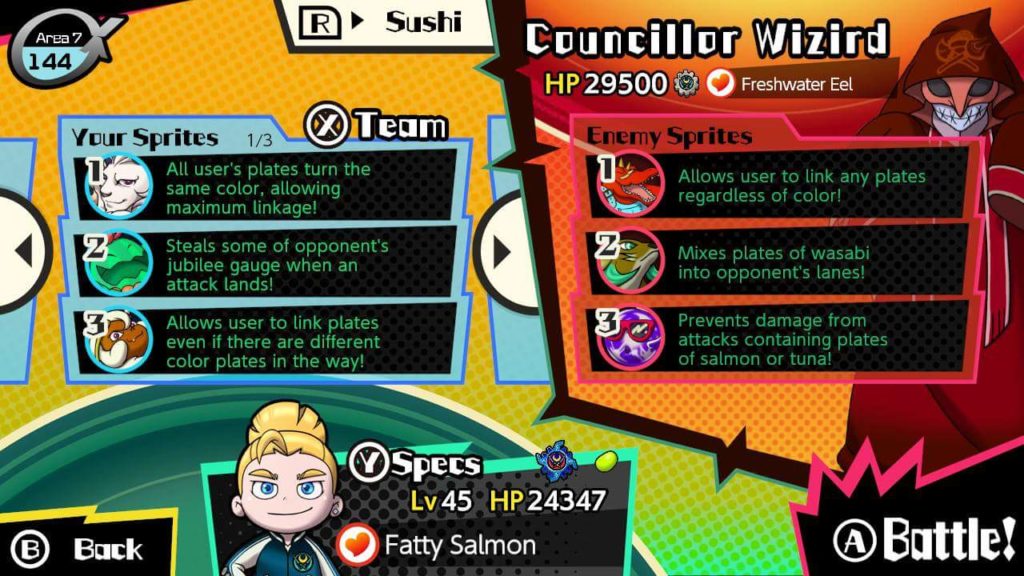 Of course, while this set-up was perfect for cruising through stages, it wasn’t enough to ensure I got every challenge star.  Each of the 146 story stages (and over 230 total stages) has three stars. The requisites are as varied as heal a certain amount of damage, create a certain sized stack of plates, use an ability a certain number of times, and more. I started building teams to accomplish specific goals while playing. One team healed; another stalled for time so that I could reach the insane amount of required skill uses or jubilees.

In the beginning of the Sushi Striker: The Way of Sushido, getting these stars was more a matter of course. I’d replay stages, sure, when I relied on different teams to deal huge finishers or heal a certain amount. But for the most part, it didn’t take a lot of effort.  In the challenge stages, though (unlocked in each area by collecting enough challenge stars), they started to become far more demanding. It was no longer enough to throw sprites together and hope for the best. Instead I had to strategize about every element. 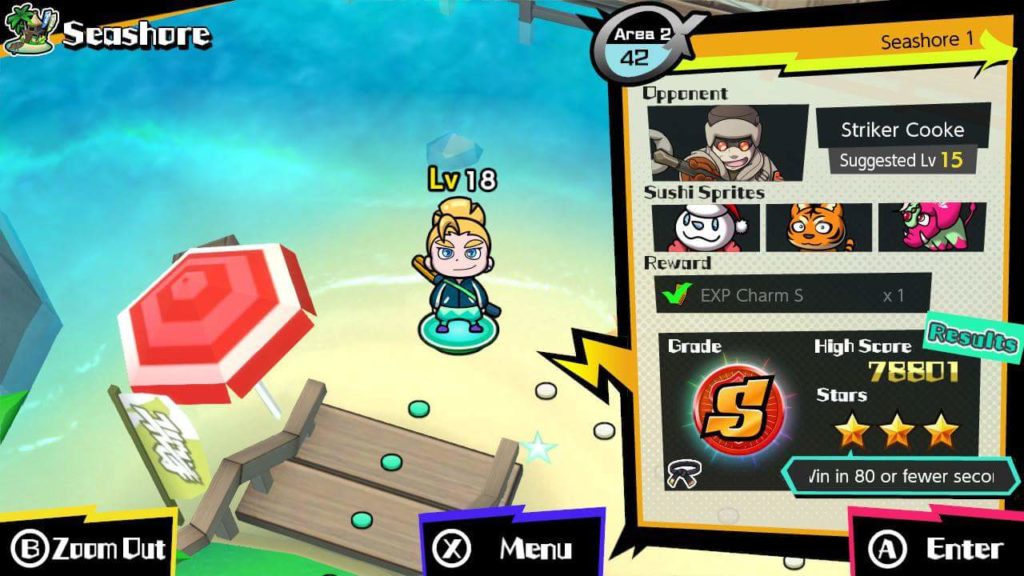 As well as the challenge stars, you’re also graded (D to rainbow S). And the game also keeps track of your training belt completion. The training belt is a held item that cuts Musashi’s health in half. That makes some battles more difficult (others are just as easy due to relatively low enemy damage output). I never unequipped the item during the main story missions, but on occasion found it made some of the side areas extremely difficult (at least until I put together the perfect team). Between chasing rainbow S scores, training belt completion, and challenge stars, there’s plenty of fish to sink your teeth into.

Each match takes about a minute or two to complete, making the game ideal for short play-sessions and on-the-go play.  But I also found the RPG elements and story enough of a draw during multi-hour marathons (watch out for hand-cramps).

I didn’t touch the Switch version’s touch-screen gameplay, since I have thick, sweaty fingers that haven’t even come into contact with my 3DS chassis, let alone an actual screen. I stuck entirely to the button controls, which worked as intended most of the time.  It can be frustrating to start with the specific plate you want, especially during a speed boost or jubilee, when the plate you want passes right by your reticle. My strategy generally relied on holding A and seeing what was available to me. When there was nothing, I’d aim for the next color.  If I saw a line forming that looked particularly worthwhile, I’d nab it. Playing in this manner didn’t keep me from scoring Rainbow S’s all but across the board, but it did bring rise to the occasional frustration, when I want a black plate, and I can’t seem to grab it. This was eventually alleviated as I put together a Sushi Sprite team with enough matching plates, where it became difficult not to get the color I wanted.

Some matches include a variety of items, such as bombs, lightning bolts, wasabi, and more, that keep things varied, but they’re not introduced at random. Certain stages are built around them. 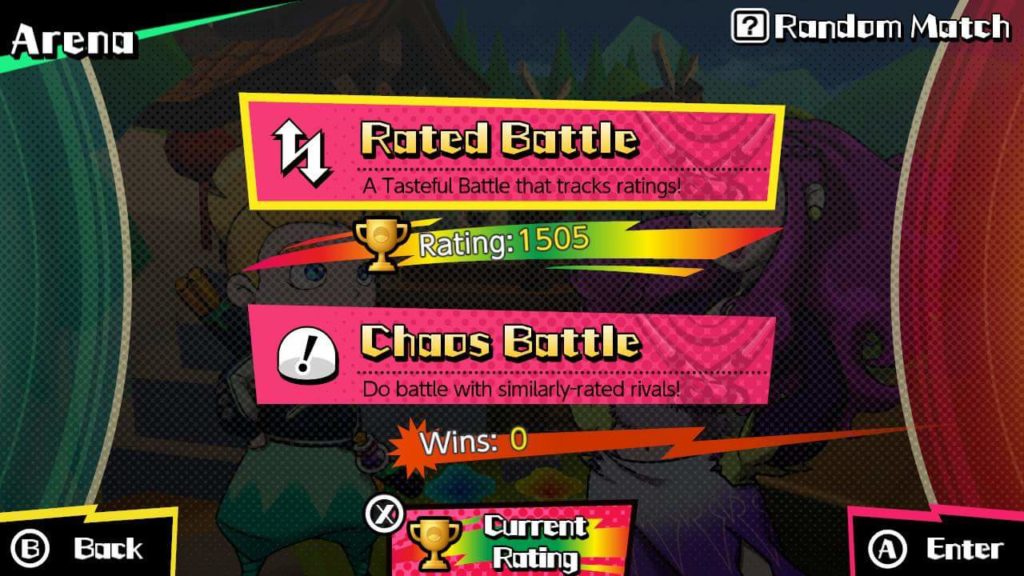 Sushi Striker: The Way of Sushido also has multiplayer options, but they’re fairly limited as far as multiplayer goes. Local versus is the name of the game, whether wireless of via a single switch with shared joy-cons.  Online bouts are also an option, including a ranking system. Victories there will earn you items to use offline, too. An offline, challenging puzzle room changes up the sushi action a bit. It asks you to clear every plate on still lanes as well.

Sushi Striker: The Way of Sushido is a puzzle game asking for $40 (3DS) or $50 (Switch- the one I bought) in an era of heavily discounted launches from the indie scene, and all but free titles on mobile.  While this may go down like a plate of straight wasabi, Sushi Striker is a complete package. This is a puzzle game with a budget, and it shows. It is by no means a mobile game buttered up and sold for a premium. It’s a console ready puzzle game that hearkens back to a time when even that genre received respectable production values.

Sushi Striker: The Way of Sushido is atypical, from its premise down to its gameplay. It’s bizarre in all the best of ways. It takes over a dozen hours to complete, and longer still if you want to reach every triumph. Collecting Sushi Sprites is fun, and testing out how their skills and sushi work together satisfies a strategic mind. I found myself matching sushi plates before bed, even after I’d put the game down. Some matches feel like they end in a loss just because the lanes didn’t line up right, rather than by your own fault, but build the perfect team of sprites and you’ll find control issues and bad luck fade away.

Sushi Striker: The Way of Sushido combines action puzzling, strategy, and a buffet of RPG mechanics to create a deep and dazzling dish.

Brutal Gamer's Nintendo Editor began his gaming life a little late- at five years old. But he's made up for it in the two decades since, gaming and writing about gaming with the same passion, fervor, and unrelenting love as his five-year old self.
Previous Agony (PC) Review
Next Spider-Man video game to star in slate of Marvel Comics alt-covers, while costume becomes canon