Harley Quinn as a New God? Looks like that’s just what’s on tap for the clown princess of whatever, as she falls into the clutches of Granny Goodness… or is that the other way around?

“Harley Quinn does and says the things we all wish we could get away with,” continues Humphries. “She’s the embodiment of wish fulfillment. Harley is a wild card, and she’s a survivor; two things we all want to be at different times of the day. And Apokolips is just the beginning of our plans for Harley. No one in the DCU will be safe from Harley Quinn.” 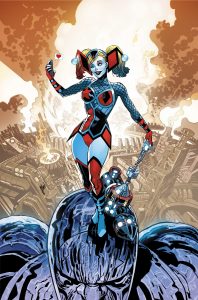 Well. That’s a frightening thought, as is the rest of this new story arc, kicking off in Harley Quinn #45. That’s the issue that sees Harley artist John Timms joined by new series writer Sam Humphries. And it sounds like it’s going to be a decidedly oddball adventure.

In the new arc, Harl is kidnapped by Darkseid’s Female Furies and brought before their mistress, Granny Goodness. Why? Because Granny wants her as her newest student, and in turn, she’ll help hunt down a Fury gone rogue.

See? It’s weird. Then again, this is Harley.

And, though we’re getting a “new” version of the character here, it sounds like we’ll be heading back to more of the Harley that fans dug so much in the first place.

“The biggest question, and the biggest challenge for Harley, is defining if she’s a hero or a villain,” says Humphries on his new assignment. “But why can’t she be both? Or is there a third choice to explore? My vision for the book is ‘What if Bugs Bunny were a chainsaw, hosting Anthony Bourdain’s show, but in the DC Universe?’ In our first three-issue story arc, John Timms and I are going to bring the crazy Kirby Krackle to HARLEY QUINN—focusing on the manic energy that made us cheer for her and the tragic emotions that made us fall in love with her.”

Honestly, the Harley stuff could prove to be tons of fun, but there’s another reason I’m pretty excited to hear about this one. That being, that there’s been an awful lot of New Gods stuff popping up in DC lately, and this book continues that trend. They were neglected for a while in the New 52 and post-Rebirth, so that’s a particularly cool thing to see. And with this new book set to run a major storyline with the Gods, it seems as though they’re not going anywhere, any time soon.

Harley Quinn #45 lands in stores on July the 4th.

Jason's been knee deep in videogames since he was but a lad. Cutting his teeth on the pixely glory that was the Atari 2600, he's been hack'n'slashing and shoot'em'uping ever since. Mainly an FPS and action guy, Jason enjoys the occasional well crafted title from every genre.
@jason_tas
Previous Mark Bagley cover for Amazing Spider-Man #800 revealed
Next Microsoft clears more original Xbox titles for Xbox One backwards-compatibility