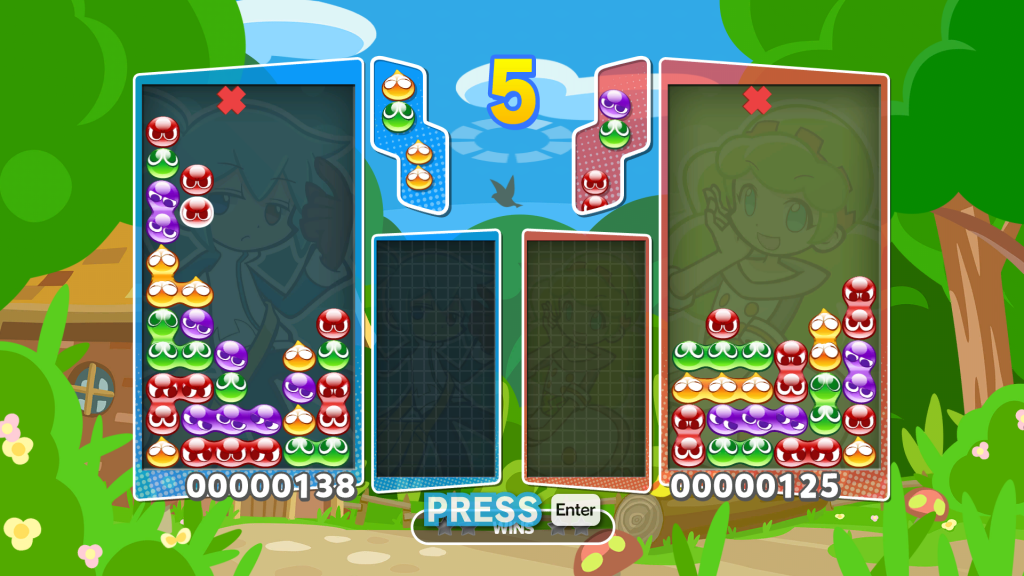 Puyo Puyo Tetris is a puzzle game with the mechanics of Tetris and Puyo Puyo.

–Skip this if you know how both games work–

Puyo Puyo is similar except you get groups of 2-4 Puyos of different colors raining from the top of the screen. Group 4 or more Puyos and you clear them. Get another group to clear because of the previous group being cleared and you get a chain bonus (like above). These chains can get crazy where you can get 8 or more chains going off.

–You can keep reading from here!–

There are 3 main game options (Adventure, Arcade and Online) with choices between Puyo Puyo, Tetris or Fusion.

Adventure mode of Puyo Puyo Tetris is basically story mode. You play different “Acts” as the Puyo Puyo team meet the Tetra team from a different dimension because somehow Puyos can manipulate the space-time continuum? It has a 3-star challenge system (think Angry Birds) where defeating your opponent under certain game modes and settings awards you 1-3 stars depending on how hard you whoop the computer opponent(s). You’ll also unlock stuff as you play such as new characters, stages and background music. You also earn credits which can be used to purchase alternative voice packs, block and Puyo designs.

As you can see there are a crap ton of game modes!

You can play against people from all over the world and watch their uploaded replays to feel like nothing matters because you’ll never be that good so why bother playing this game? You can play ranked matches or “Free Play” (unranked) and choose the game modes or settings you’d like. You can also create match rooms or join them.

Figuring out handicaps at first is confusing as hell. There is no difficulty settings for the computer opponents which there should be because it is far easier to set and understand than handicaps! You can set the handicaps (ranging from easy to hard) to Sweet, Mild, Medium, Hot, Spicy which affect the speed at which blocks and Puyos fall as well as Garbage sent to other players.

The clacking of Tetris blocks and little bloops of the Puyos is extremely satisfying. The background audio is subdued so the players can hear their actions clearly. A lot of the sound effects are neat and clear so you won’t be confused when you hear your opponents wrecking you with a barrage of “TETRIS!”. The background music isn’t bad but it’s not that great either.

The story is extremely childish and boring. It’s perfect for children between the ages of 3 and 9. Most of the characters have irritating, grating voices that will scratch the chalkboard that is your ear holes! Luckily there’s a skip option for all the cut-scenes.

There are too many to list but pretty much all of them are annoying, uninspired and uncute. How the hell did Nintendo screw these designs up this badly? Japan is known for cute and adorable but all these kids, creatures and robots can die for all I care.

Most of the menu interfaces are good and you can customize A LOT of settings – until you want to change how your Puyos and Tetris blocks look. You don’t have a preview mode for them – which is beyond stupid. You have to check them out at the shop.

Puyo Puyo Tetris is a great but somewhat silly game for fans of both Puyo Puyo and Tetris. You can choose one or the other or both and the AI and challenges should keep the avid puzzle gamer busy for far too long than they want to admit. Just avoid staring too much at the characters and skip all the cutscenes – unless you actually find them cute.

A polished puzzle game that has great mechanics and a massive roster of game modes. If only the characters or story were just as great but it's a "children's" game so whatcha gonna do?

Megan here! I am pretty well versed in all things weaboo and geek. I've loved videogames since I was born and even made my own for my 3rd year of Multimedia at the University of Pretoria in sunny South Africa. I have enjoyed anime from the days when Pokemon was considered satanic and Aniplex used to exist on DSTV. In the past couple years I have really gotten into manga, particularly Berserk to see where the story headed after the original anime. If there's one thing I will always love 110% it is cats. Don't doubt my faith in my love for felines.
Previous The Avengers get brand new Fresh Start this May
Next The Walking Dead 812 “The Key” Recap