Folks who have lamented the lact of action in recent episodes of “The Walking Dead” have had a lot to be happy about this half season.

Since the show has returned from its mid-season hiatus, “The Walking Dead” has been on a non-stop, action focused bender. The result is yet another action packed Sunday night, as Rick (Andrew Lincoln) finally has a direct run in with Negan (Jeffrey Dean Morgan) in the heat of battle.

Maggie on the Hilltop:

Maggie (Lauren Cohen) is still on the Hilltop trying to lead her people to prosperity. She is joined by many of the residents of Alexandria, who fled there after the Saviors firebombed the city.  Enid (Katelyn Nacon), Michonne (Danai Gurira) and Rosita (Christian Serratos) make up the rest of the supporting cast here.

The primary conflict at the Hilltop is still a lack of food. Surveying the surroundings, Maggie notices an SUV in a nearby field. After some deliberation, the group retrieves the van. Inside the van, the group finds a note and some milk crates. The group is to fill the crates with records in exchange for “a key to their future.”

Maggie originally balks, but at the insistance of Michonne, they go to meet the mysterious party. the group meets a mysterious trio- Georgie (Jayne Atkinson, Midge (Misty Ormiston) and Hilda (Kim Ormiston). Georgie, the leader, tells Maggie that she can tell that they are good people, and wants to help. In exchange for the cultural value of records, Georgie will provide invaluable information.

Maggie takes the trio back to he Hilltop, where some more deliberation occurs. The Hilltop group breaks when Georgie offers to include food in the deal. In exchange, Georgie produces a massive textbook of instructions on how to produce things for a civilized society. This includes hand drawn schematics and instructions on how to process varying foods and build varying pieces of equipment. Maggie seems blown away. Georgie promises that she will return in the future.

Rick, Negan and the Other Guys:

Negan and a contingent of his top men are on their way to the Hilltop to free the men Maggie has taken hostage. Negan is in his own car while Dwight (Austin Amelio) and Simon (Steven Ogg) wax poetic about how to proceed with the Hilltop.

The caravan is driving through a small city, and Rick, lying in wait to ambush Negan and get him alone, smashes into Negan’s car and breaks up the caravan.

Negan briefly passes out in his car after wrecking, and Rick advances upon him, firing rounds and rounds of ammo into the car. Negan ducks for cover into a nearby dilapidated building. Rick fires off all of his rounds and is only left his hatchet. Rick throws the hatchet up a set of stairs where Negan is waiting with Lucille (a barbed-wire wrapped baseball bat). Negan trips and drops Lucille into the depths of the staircase. Rick makes a move to chop off his fingers, but Negan drops down at the last second.

Rick follows Negan into the bowels of the building, What follows is a tense exchange where Negan continues to drag Rick for getting lots of his own people killed. Meanwhile, walkers are following them into the building. 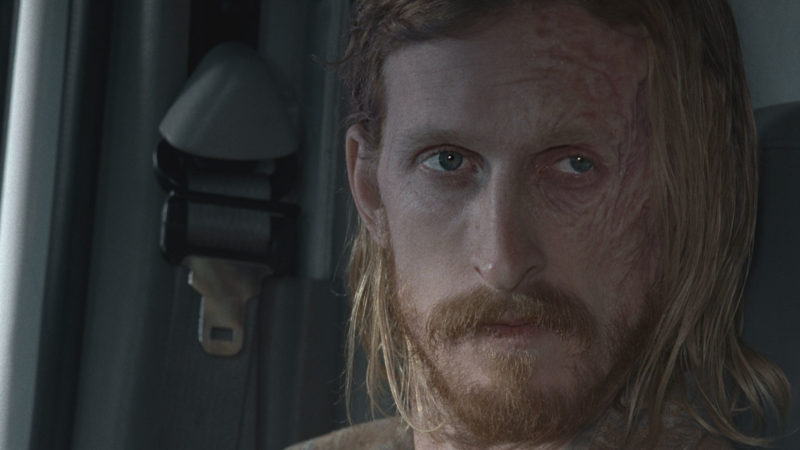 Negan offers to forgive Rick if he can get the communities to fall in line. Rick asks Negan why he would trust any offer after what Negan did to the trash people. Now, remember, Negan told Simon to spare them, and is caught very off guard by Rick telling him that they are all dead.

Rick doesn’t have it, finds Lucille, and lights her on fire. This sends Negan into a rage and the two have a fight with walkers flooding the proverbial arena.

While this is going on, Dwight and Simon are looking for Negan. They find his crashed car, and without checking to see if he is inside, light the car on fire.

this seems like sacrilege, but lets break this down: Simon thinks Negan is running the Saviors into the ground by sparing lives. Simon plans to kill everyone at the Hilltop just like he did the trash walkers. Dwight is just as happy to see Negan dead, but goes along with the plot.

The episode ends with Negan waking up in a car. The camera pans and we see Jadis (Pollyanna McIntosh) driving. She tells Negan to shut up and knocks him out again.

This was the best episode of The Walking Dead in more than a season. We got some genuine development with Georgie and Rick/Negan and a ton of action to fill the episode out. We get a real sense of the passions burning close to the surface of Rick’s mind, with Carl being dead.

There was tension and progression, and honestly, that is all you should be asking for. The storyline is getting better and better with Jadis kidnapping Negan. This half of a season has truly been a return to form for the show.

The conclusion of this war is going to be incredible.

Erich was introduced to gaming by his grandfather before he could walk. Since then, he has grown up loving Nintendo and most games in general. He couples his love of videogames with journalism to cover news, provide reviews and tell it how it is in the gaming world.
Previous Puyo Puyo Tetris (PC) Review
Next Star Wars: Battlefront II’s progression system is finally (almost) ready