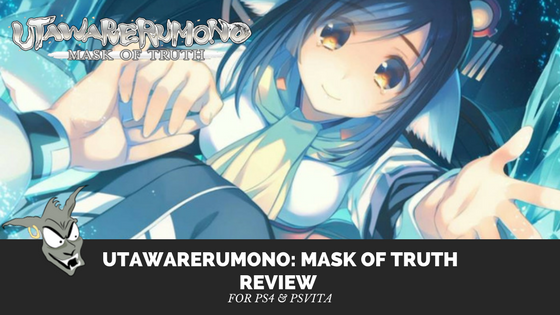 Utawarerumono: Mask of Truth is a Visual Novel with some Strategy Role Playing Game elements. That can’t go the other way around and is an important fact when considering to play this game.

There’s a War Going On

Mask of Truth is the conclusion and sequel to the recently released Utawarerumono: Mask of Deception (May 23, 2017). It brings 80 plus hours of gameplay which is more often spent while reading the game.

For the first few hours of gameplay, I’ve spent more time reading the text of well-drawn charterers in static environments then playing the SRPG 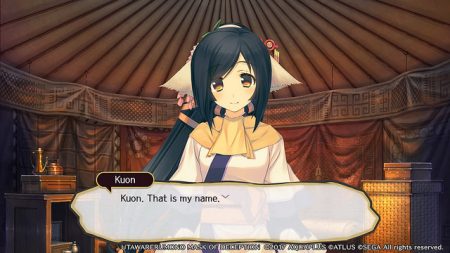 You begin the game as Kuon, the princess of Tuskur, the Divine Sicon, unconscious for ten days. Kuon is then taken to a bath house not remembering anything, and apparently, something is being hidden from her since the events of the last game.

There’s a war going on, and Kuon must stop her childish ways of being a “Traveler” and now lead an unexpected battle against her clan the Tuskur against the Yamato but not before she finds out what happened to her friends and save them.

All of that is what I can gather from the beginning hours of gameplay without spoiling too much.

The mechanics in the Mask of Truth is something impressive to work with though. The Visual Novel allows the player to jump back to past lines of dialog in the “Backlog” and Auto play the lines to read at the games intended pace.

“Best Suited to Being a Regular Novel”

Of course, there’s the next button and skip button but using the skip is pointless for players who don’t want to read and just want to get to the parts that are SRPG. This game is far from just a game but almost feels best suited to being a regular novel with out the Turn-based gameplay.

In the button commands, it also allows you to hide the text, but the voice acting is solely in Japanese. It would have been a smoother ride if there were an English version of the game especially when there are 80 plus hours of content. It can get pretty tiring to read, but luckily the charterers are interesting and not generic. I started to care for them and read into their deeper story lines, but again it’s still just reading.

When we finally get to the Strategy RPG elements, gameplay starts to pick up. 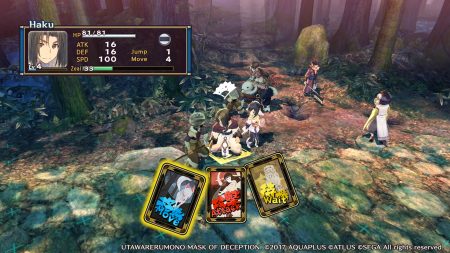 When preparing for battle, you can shift through various options comparing and contrasting the perfect unit for combat. Switching through elements such as Defense, Speed, Level, GP, Zeal, Attack, and Normal (Default Mode).

The player can also view the map and inspect the characters and the environment around them to plan out your attacks ahead of time. There’s also a more top-down graph-like view of the area for more precise movement.

Knowing allies and enemies elements are essential to winning battles. The elements are as listed: Fire, Water, Wind, Earth, Light, Dark, and Neutral. Other elements have an advantage against some elements while some may be weaker or just balance out to be the same defense and attack ratio.

Aquaplus, the Developer, does a great job giving us all the information and details that are used for combat. Including the ones mentioned above, there are also “Result Predictions.” They tell you how much your allies will dish out to an enemy and how much the enemy will return to the allies. Again they are only predictions; different factors are involved such as your accuracy on an action chain.

Action chains are like special moves. When activated manually or on auto activation you will be prompted to play a three-second mini game. Hit the out going circle in the very center of the screen, and you’ll get bonus attack plus more Zeal. You can do this up to two times.

Zeal is basically your power, once it’s powered up by using action chains and skills you’ll have OverZeal. It will gift you with bonuses and an element for a limited time.

“It Has Trouble Deciding on What It Wants to Be” 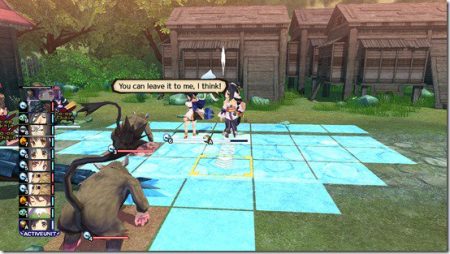 Furthermore, they show you the turn-based order in which you, your allies, and enemies will attack along with their health and the element they are using.

Each character has a certain number of moves and jumps; those are usually a lower number of turns than moves. There will be objects on the battle ground where you can’t simply walk through and must use a jump to get around it. Useful for running away to spare HP or get an upper advantage on an enemy.

While Utawarerumono: Mask of Truth has some great mechanics within its Visual Novel and Strategy RPG gameplay, it lacks in pacing and presentation. Mask of Truth improves on Mask of Deception with better turn-based tactics, better action chains, and the overall story of the original game and the Utawarerumono series itself but it has trouble deciding on what it wants to be.

Is it a visual novel, SRPG, anime, or just an everyday book. I’m not sure, but it definitely needs to do a better job blending these two for Western audiences. I’d expect an English voice acted version would help, but I wouldn’t know how much.

Will You Stop The War?

Utawarerumono: Mask of Truth is a beautiful game with colorful characters, a world with meaning, sound recorded and remastered at the legendary Abbey Road Studios including EastWest Studios, and a story to last a lifetime but I fear some won't see it as a "videogame."

Dylan is a writer, gamer, avid movie lover, and PlayStation extraordinaire. Currently, he attends Radford University in pursuit of a BS in Media Studies with a concentration in Journalism. When he’s not writing the next epic post (but you know he is), he plays games like Destiny, Uncharted, Wolfenstein/DOOM/Dishonored; long story short: If I played the game, I liked it; if I haven't played it, just remember that I'm in college.
@Dylanslegos
Previous PS Plus: Free Games Lineup for September 2017
Next CD Projekt Red celebrates 10 years of The Witcher with touching video