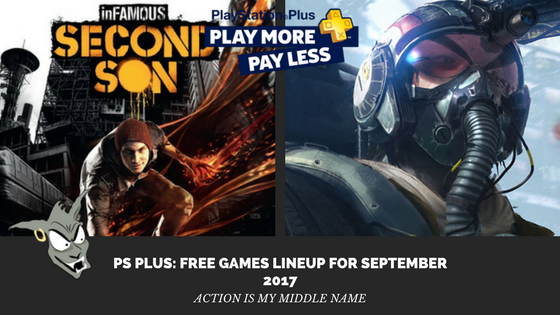 PS plus is bringing inFamous: Second Son and Strike Vector to your PS4 for an action packed month for the slow transition into the new work year.

PlayStation is back for their monthly release of the latest PlayStation plus game’s, and so am I (Just don’t expect to get free games out of me).

First up we have infamous: Second Son on PS4, developed by Sucker Punch makers of the Sly Cooper series, explore a new inFamous game set years after the events of the second inFamous game. Play as Delsin Rowe to save your tribe and win back Seattle in and expect battle (and easy platinum) against the Departement of Unified Protection.

Stike Vector Ex on PS4 is an all out fully-loaded aerial-combat game. On this revamped console version there bringing a solid-story with cutscenes and everything, you expect from a good campaign. It doesn’t stop there though, the game’s highlight is its fantastic combat system and modes that will keep you coming back for more.

Truck Racer for PS3 is a Twisted Metal like game, minus the shooting. With fully customizable vehicle and up ten different environments and  48 tracks, there’s no reason not to floor it.

Handball 16 is Bigben Interactive’s first game in their Handball series. Take on your friends in local multiplayer with moves and tactics similar to all your favorite players out on the field.

Chill out with “We Are Doomed” for PSvita in this twin-stick shooter. Shoot polygon baddies from your SUPERBEAM over 30 waves, neon environments, a mellow soundtrack, and even an endless mode all on the go!

Hatoful Boyfriend is the fan favorite visual novel about a school for birds finding love. It’s an odd one, but you know what they say “don’t knock it till you try it.”

PlayStation plus is also giving us a couple of extra bonuses just for being with them. On the PlayStation VR PS plus members in the US and Canda will get RIGS Mechanized Combat League as a gift from September 5th through November 7th.

Further more PS plus members will be able to play Dead by Daylight from September 15th through September 18th for free. After that scary weekend, those members will receive a 30% off discount on the game. The exclusive discount will last until September 22nd.

Also, the free-to-play game Tomb of Annihilation will bring a new update bringing the Neverwinter Plus pack for free until October 16th. The package includes VIP time, a panther companion, and more!

Lastly, That’s You! is still free for everyone until October 23rd and if you haven’t purchased this month’s free games do it now before it’s too late. (Click Here)

Dylan is a writer, gamer, avid movie lover, and PlayStation extraordinaire. Currently, he attends Radford University in pursuit of a BS in Media Studies with a concentration in Journalism. When he’s not writing the next epic post (but you know he is), he plays games like Destiny, Uncharted, Wolfenstein/DOOM/Dishonored; long story short: If I played the game, I liked it; if I haven't played it, just remember that I'm in college.
@Dylanslegos
Previous Capcom’s Puzzle Fighter returns as mobile game
Next Utawarerumono: Mask of Truth (PS4) Review