At first though, you might consider headsets to be relatively similar across the board. After all, they really have but one function. And honestly, if the sound flows through ’em, well how bad could they be… right?

As someone who’s used dozens of headsets over his gaming life, I can tell you first hand that that assumption isn’t 100% on the money. Yes, on the one hand, a headset does need to transmit sound to your audio receptors, but just how that sound comes to you counts for a lot.

And that’s not even counting comfort. Maybe the biggest after-thought in mass market headsets is how these things sit on your head (or in your ears). I’ve used earbuds for most of my life for music, and they tend to get a little painful after a while. Gaming for hours on end with them in? Yeah, no thanks.

But say you’re going over-the-ear, doesn’t the form-factor automatically take care of that? Sure it does, but it also plays host to other issues. ill-fitting ear cups are almost as pain-inducing as buds. And a strap that sits funny on your noggin, or headset that just plain old weighs too much, can induce headache.

So where does the headset in question, the Hyper X Cloud Revolver S sit? If you listen to our BG podcast regularly, then you already know the answer to that. I’m very happy to say though – they’re pretty freaking great.

I’ll break it down for you. 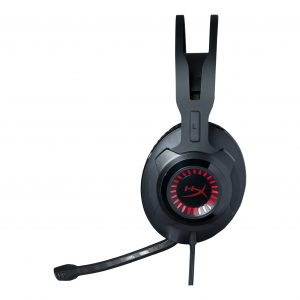 The first thing you might think when you look at the Revolver S, is that it’s not all that flashy. And no, it’s not. This isn’t something that will probably turn heads the way a Razer headset will, mainly meaning that there are no loud colors to be had. This one’s gunmetal all over, with some hints of white- and that’s it.

Personally, I love that, as the bright and colorful headsets kind of out me off. That might be different for you, so a little “your mileage may vary” comes into play, but there’s so much to like here that I’m going to say that you should keep reading anyway.

For starters, there’s the weight, or lack thereof.

The Revolver S isn’t heavy in the least. No, it’s not the lightest headset I’ve used (that honor goes to Plantronics’ latest RIG), but it’s close. It also sports one of the most comfortable headbands and ear cup combos that I’ve seen in a ‘set.

This thing is uber comfortable, and didn’t weigh on me even after a few hours of constant use. The cups also do a fantastic job of blocking out ambient sound, something that translates into a better listening experience for the user.

Now, don’t be confused, even though the Revolver S does block out some of the sounds around you, this isn’t a noise-cancelling headset. You will hear the world outside of your window, but it won’t get in your way while you enjoy your games/tunes.

The Revolver also seems pretty sturdy. I’m not the roughest with my stuff to begin with, but this headset looks to be able to take a fairly constant use schedule and not fall apart, thanks to its steel frame. That’s not something that I’ve found in some lesser pairs.

As with any headset, the biggest value comes in what you can pair with it. As a corded unit, the Revolver S’ can be used with pretty much anything that has an audio jack. Unfortunately that rules out newer iOS devices, as Apple shed its jack last gen. Still, that’s hardly the target for Hyper X with these, so it’s not really a detraction to me.

That all shakes out to mean that the Revolver S can be used with most everything else. The likes of the Xbox One, the Switch, the 3DS, and the PS Vita can all make use of it. Notice I didn’t list the PS4 and the PC there? That’s because they don’t just make use of the Revolver S, those two platforms go one step beyond.

Included with the S is a dongle that plugs into either the PS4 or a PC via not just the stereo jack, but also by USB. The dongle is actually a mini sound card, called the Advanced USB Audio Control Box with DSP Sound Card.

So with that, you could probably imagine that it can do a lot. The little device can latch onto your shirt with a back-mounted clip, and provides a host of features and control options. You can mute your audio, control volume levels, flip between your presets, and even activate dolby, all of which is otherwise impossible with just the headset alone.

Which brings me to…

I have used the S’ both with and without the Control Box, and my opinion on both options is pretty simple.

Alone, the Revolver S is a terrific headset. It includes all of the form factor items I mentioned, and will perform admirably. I have enjoyed clean, crisp audio on my Xbox One (by plugging into the controller) with it, and have zero complaints. This is mainly due to the 50mm drivers.

I’m not the biggest audiophile in the world, but Hyper X says that the headset is stocked with some good stuff, and I believe them. The quality of the sound is excellent with the Revolver S, among the best headsets I’ve used.

Now that I’ve said that, the difference with the Control Box is… incredible.

Sound quality goes from great to amazing with the Box plugged in. The bass is amazing, which is something that Hyper X touts, but past that the sound in general is just light-years ahead of listening without the box plugged in. It’s fantastic, and I’m going to stop there, since I’ve gushed about it to a number of people and it’s getting embarrassing.

I just wish I could make use of it on my Xbox One (and Switch too) since it’s my primary gaming platform. Unfortunately I can’t, since again, the Control Box is incompatible. Hopefully, Hyper X will figure something out in a future version of the Revolver S, because I’d pick it up in a snap.

Also, I should mention the mic, even though I don’t really use all that much. I’m not a social guy when I play games, so it’s not all that big of a deal for me, but I’m told it’s excellent by my BG podcast “co-stars”. Apparently, my voice is much clearer when I make use of it, and drops off less.

All in all though, this is a terrific headset. That’s true either with or without the Control Box plugged in.

A simple design that works, and is extremely comfortable - 89%

The sound without the Control Box? - 87%

After using this headset for a while, I'm reminded why I had enjoyed the Cloud line to begin with. The comfort is terrific, and the sound quality is just as good. Plug in the Control Box though, and you've got a virtual 7.1 setup that'll have you in audio nirvana.

Jason's been knee deep in videogames since he was but a lad. Cutting his teeth on the pixely glory that was the Atari 2600, he's been hack'n'slashing and shoot'em'uping ever since. Mainly an FPS and action guy, Jason enjoys the occasional well crafted title from every genre.
@jason_tas
Previous Is There A Game of Thrones Game Beyond The Wall?
Next Wizard World Comic-Con Chicago 2017