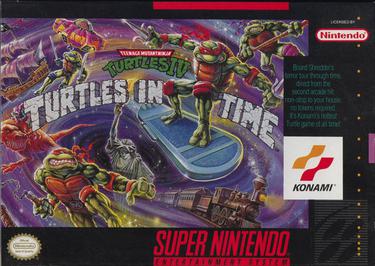 The Teenage Mutant Ninja Turtles series continued onto the SNES with Turtles in Time. And it’s still one of the best games the franchise has produced.

Starting off this Retro Review, I think I’d be remiss if I didn’t mention the odd history of the Turtles in video games. They were red hot in the 80s for sure, but unlike most 80s toons, they didn’t stop there. The green teens ran wild for a chunk of the 90s too, and now again today they’re as popular as ever. However huge they might be though, the TMNT have had a rocky road when it comes to games.

Their very first adventure for the NES was blisteringly hard, but fun. It wasn’t the most “TMNT” of games though. Sure the Turtles were there, and some of their supporting characters as well. Thing is though, the game also included chainsaw-wielding maniacs and oddball monsters as enemies. It was weird.

TMNT 2 was actually an adaptation of the excellent arcade game. It fixed everything, literally everything, that I had an issue with from the original as a TMNT-worshipping kid.  Not only were Rocksteady and Bebop in the game, but the graphics were excellent and looked way more like the cartoon. Roughly the same thing goes for the third title in the set, The Manhattan Project. I won’t go on about that one, since I wrote a full review of it not all that long ago.

And that brings us to Teenage Mutant Ninja Turtles IV: Turtles in Time. I mentioned a “rocky road” earlier in this article, and that’s because TMNTIV on the SNES was perhaps peak Turtle when it comes to games.

Released in 1991 as an arcade title, TMNTIV was brought over to the SNES a year later. And it was glorious. But it was also kind of the end for Turtles games. Well, good ones anyway. Other than the fighting game TMNT Tournament Fighters, there’s been little in the way of fun Turtles titles on any platform since TMNTIV.

Why that might be, I don’t know. I can certainly tell you why Turtles in Time was so great though.

Now, this being a game from the 90s, you might imagine that the plot isn’t all that in-depth. And you’d be right. There’s no exposition really, and the whole thing comes off as a series of… stuff that happens.

The Turtles are at home, and see the Statue of Liberty get statue-napped by a giant Krang. He’s in his jumbo robot body of course, and the TMNT spring into action. After fighting across a few stages, the heroes battle Shredder and he sends them into some kind of timewarp from within the Technodrome (the bad guys’ lair).

From there, the TMNT have to fight their way through some incredibly neat time periods, and get back home. Along the way, they run into a series of classic Turtles foes, some of which were added to the game, differing from the arcade original.

That’s kind of it though. Fortunately, the game doesn’t have to stand on a flimsy story, because everything else is pretty phenomenal.

Let’s get into the graphics, because that was the most startling difference between what had come before, and TMNTIV. Well, at the time anyway.

TMNTIV’s graphics were phenomenal. Konami had crafted a game that was colorful, bright, and loaded up with personality, an important factor for the Ninja Turtles. The animations were spot on too, and I say that even though not everything apparently made the jump from the arcade.

The SNES did have some limitations after all, and getting something “arcade perfect” wasn’t going to happen really. Not with contemporary games anyway. If there was stuff missing though, I certainly didn’t care, and I doubt even modern gamers would.

This game continues to look that good. Some of the effects that Konami managed to include are pretty freaking cool as well, even by today’s standards. Being able to throw a Foot Soldier into the screen (towards the player) never gets old. It just doesn’t.

Briefly, I’ll mention too that the sound is decent enough. The effects and little voice bits are all nice, and the tunes are solidly done – with a vocal-less version of the cartoon theme in there for good measure.

Have you played the last two TMNT games from the NES? Then you pretty much know what to expect here. That’s a good thing by the way, as those games were rock-solid in terms of play control, and TMNT IV doesn’t shake the boat.

Again too, the throw move into the screen is super-fun. Even so though, I do have to admit that some additions would have been nice. Instead, both the arcade original and the home game pretty much just played it safe.

There’s nothing specifically wrong with that, since the scheme works really well, but something new outside of the showy screen-throw would have been nice.

Still, if that’s my biggest complaint about this one, well then it’s pretty good. As side-scrolling action games go, it’s still one of my favorites over two decades later.

Solid control, but I would have liked to have seen something new - 80%

Teenage Mutant Ninja Turtles IV: Turtles in Time is one of those SNES games that have some kind of intangible magic. It's made terrifically, with great graphics and sound, as well as excellent (if unspectacular) controls. But more than that, the license was exploited as well as it could have been in TMNTIV, and as well as it's been done since. That's really saying something, given that there's been over 20 years since it released on the SNES.

Jason's been knee deep in videogames since he was but a lad. Cutting his teeth on the pixely glory that was the Atari 2600, he's been hack'n'slashing and shoot'em'uping ever since. Mainly an FPS and action guy, Jason enjoys the occasional well crafted title from every genre.
@jason_tas
Previous Yakuza 2 remake revealed
Next Vinland Saga – The Manga About Vikings! (Manga) Review