Vinland Saga is an epic, brutal and poignant tale of viking life, revenge and morality on par with the likes of Berserk. Yet, why had I only heard of it twice?

I had heard the manga briefly mentioned in comments sections along with another, Vagabond, which I have yet to read. The second time was when it featured in an appropriately titled YouTube video by Gigguk. Vinland Saga seems criminally underrated and deserves more attention! So, here I am giving it the scrutiny and appreciation it deserves.

In the space of 2 weeks I have consumed 86 chapters of this manga. One of the great things about finding an old manga (relatively, it started in 2005) is that there’s tons of chapters to read and its completed. Well, it isn’t completed but the plot doesn’t slag around too much and developments progress at an extremely satisfying pace.

Thorfinn was a young boy living in a peaceful Icelandic village with his father (Thors), mother (Helga) and older sister (Ylva). He had listened with wonder to tales told by Leif Erikson, who had journeyed across a perilous Western sea.

Leif had landed on unfamiliar shores and had seen a luscious, untouched land inhabited by a strange people. Having listened to these tales, Thorfinn was eager to travel and live the life of a viking.

One day, Thors and the village are requested to fight for the Danish king once again. Thorfinn, wanting to fight alongside his father, stowed away on his father’s ship. The request was a trap and a mercenary band led by Askeladd, an experienced warrior, kill Thors.

Thorfinn is devastated by the death of his father in front of his very eyes and vows revenge against Askeladd. He follows the mercs in vengeance and becomes part of their band in order to kill Askeladd.

Thorfinn’s situation resembles Guts’, creating a parallel between the 2 mangas. He has a childhood of violence belonging to an unforgiving mercenary band and through sheer recklessness proves his worth on the battlefield. Thorfinn is unsociable, rough and at times impulsive.

He follows Askeladd’s orders only with the reward being a duel between him and Askeladd. Thorfinn refuses to kill Askeladd by any other means, believing in the honor code of a warrior. This dynamic between the 2 is refreshing and creates a twisted mentor/father and pupil/son relationship.

Askeladd is on my list of love-hate characters. He is ruthless, confident and cunning. He uses Thorfinn as a tool but continually sharpens Thorfinn’s skills. His soldiers follow his orders to the tee since they never fail and they are experienced warriors themselves. Askeladd is a mysterious man however, and while his soldiers trust his ability to lead they barely know him.

There are things that Askeladd hides beneath the surface which keeps you wanting to know more about this man. 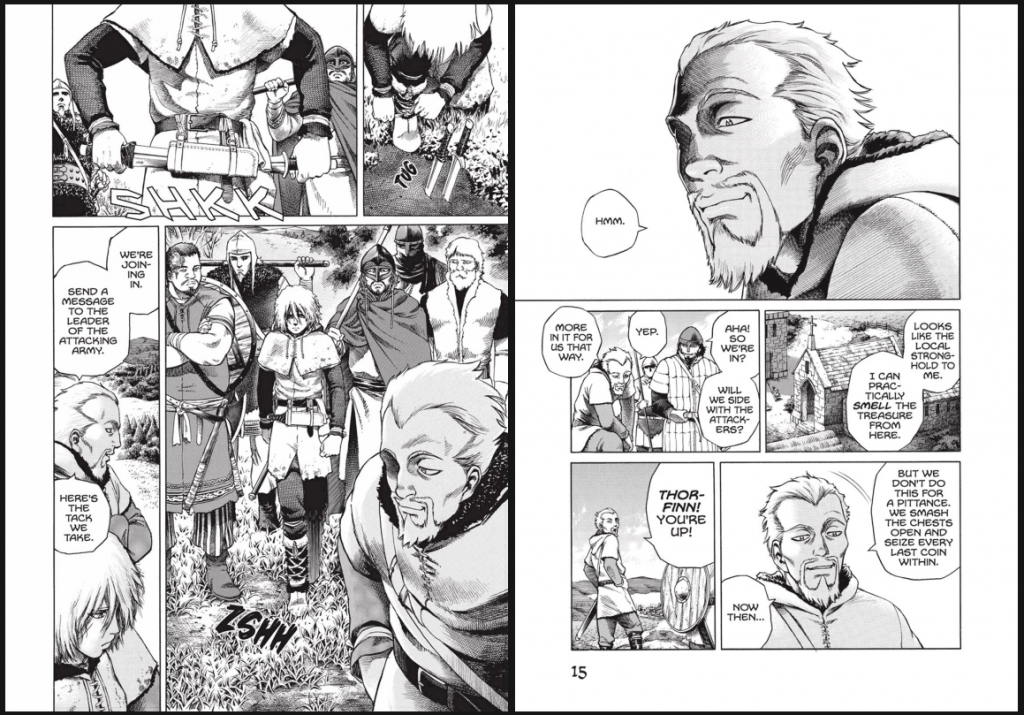 If you’re wondering why there’s only 2 MCs it’s because to include the rest of the cast would be a bit of a spoiler. I’d rather you meet the rest organically than I spoil their entrances. The great thing about this story is how it evolves and progresses in real time. Years pass, wars are fought, characters die.

The story becomes more intricate as the mercenary band become involved in the politics of the Danish royalty and their war with the English. They cover real-life territories and, while I’m not sure about historical accuracy, the portrayal of their lives in this time frame is extremely convincing.

Askeladd must use his wit to outmaneuver his opponents. Thorfinn learns more details about his father’s past. Characters are given time to reflect their motivations, feelings and desires. Vinland Saga is so well-rounded it might as well be a circle.

It is not a far cry to say that Vinland Saga’s art, at least in the first 80 or so chapters, are on par with Berserk. Yukimura Makoto, the creator, did his research. Every person is drawn realistically and with their own unique appearance with clothing, weaponry and accessories pulled right from historic objects.

Even side or background characters are made so identifiable that you can follow them throughout the manga. The fight scenes are well choreographed and drawn with violent action and momentum.

Panels where emotional weight is a must are setup and illustrated so well that I teared up at one point. This manga is one of the great ones where fine art can be found everywhere.

If the following are what you need in a manga then I highly suggest this one:

Vinland Saga is a hidden gem that I’m hoping gets more attention as time goes on. Besides from some minor critiques concerning a drop in quality a tiny bit at some points and maybe dangling, slightly slogging plots (I haven’t finished it so I’m not entirely sure at this point), I really can’t find much at fault.

It’s beautifully illustrated, written and has been such an entertaining read. As such I’ll leave you with this question: what does it mean to be a true warrior? 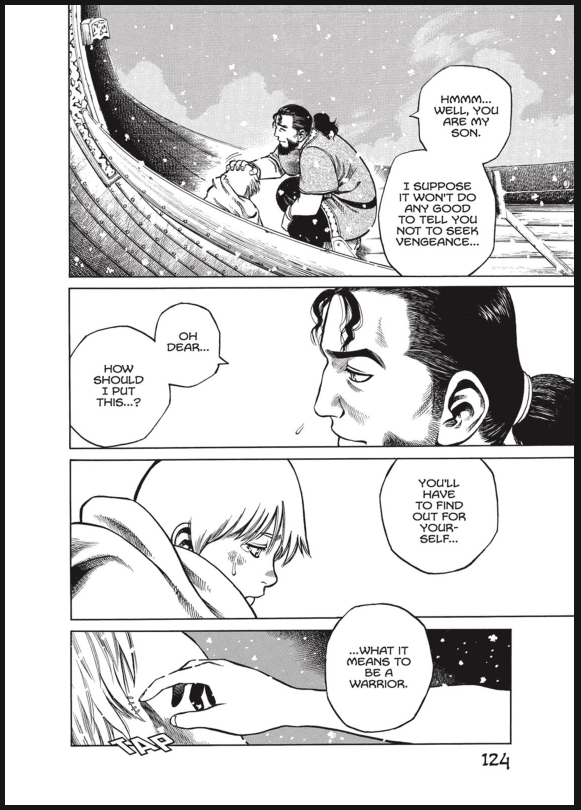 Vinland Saga is a beautifully illustrated and tragic tale of vengeance and redemption set in the viking era. Life isn't easy and neither is finding the "right way" to fight...

Megan here! I am pretty well versed in all things weaboo and geek. I've loved videogames since I was born and even made my own for my 3rd year of Multimedia at the University of Pretoria in sunny South Africa. I have enjoyed anime from the days when Pokemon was considered satanic and Aniplex used to exist on DSTV. In the past couple years I have really gotten into manga, particularly Berserk to see where the story headed after the original anime. If there's one thing I will always love 110% it is cats. Don't doubt my faith in my love for felines.
Previous TMNT IV: Turtles in Time (SNES) Retro Review
Next Cities: Skylines (PS4) Review