Turtles and Ghostbusters to meet for second crossover event

Ninjas, proton packs, and a while lotta NYC. Yep, the Ghostbusters are meeting up with the Teenage Mutant Ninja Turtles one more time.

I love this town

Two fan favorite franchises should make for a pretty memorable crossover. It seems like the first meeting of the Ghostbusters and the TMNT did just that too. The book was a hit with fans and has now spawned a second volume of the unlikely teaming.

Both ongoing series’ are from publisher IDW however, so this isn’t a two-company crossover. Still though, the Busters and the TMNT are as different as you can get in terms of content. So in that way it’s kind of on the same level.

As for the story, this time around the TMNT have been pulled into the “ghost dimension” by an old enemy. And you-know-who will have to get ’em out. That’s right, the boys in grey.

Expect ghosts, ‘chucks, and everything in-between, from artist Dan Schoening and the writing team of Erik Burnham and Tom Waltz. And if those names seem familiar, it’s probably because all of the above have worked on Ghostbusters and Turtles comics. Schoening won’t be handling the art alone either. He’ll be joined by Pablo Tunica, Tadd Galusha, Mark Torres, and C.P. Wilson III. Oh, and all of them have worked on either Ghostbusters or Turtles books (for a few, both) in the past too. 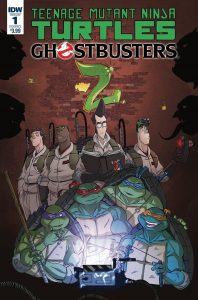 So this is a team that knows what it’s doing

“When Erik and I first broached the idea of joining the TMNT with the Ghostbusters way back when, it felt like a wonderfully impossible dream,” said co-writer Tom Waltz.  “Well, that dream came true with the first volume in a big way, and now I’m absolutely ecstatic to have the opportunity to once again help bring my two favorite quartets together for another massive comic book crossover event! And, like the first go-around, the events in this story directly flow out of and affect the storylines in both ongoing series.”

“I had such a blast working on the first crossover with Tom, and in the years since, we’ve talked about what we might do if we ever got a crack at a sequel,” said co-writer Erik Burnham. “When the opportunity came up, we didn’t even use a single one of those plans! Instead, we grabbed villains from both universes and mixed them together to form the foundation of a fun story that furthers the ongoing stories of both the Turtles and the Ghostbusters. Even better, we get some more one-on-one scenes, allowing their complementary personalities to shine and we’re beyond excited to share!”

Watch for Teenage Mutant Ninja Turtles/Ghostbusters 2 #1 to arrive in stores on Wednesday, November 1.

Jason's been knee deep in videogames since he was but a lad. Cutting his teeth on the pixely glory that was the Atari 2600, he's been hack'n'slashing and shoot'em'uping ever since. Mainly an FPS and action guy, Jason enjoys the occasional well crafted title from every genre.
@jason_tas
Previous Atlus teases three new Persona spinoff titles
Next Titanfall 2 Ultimate Edition out now