Maybe you’ve heard of Edgar Allan Poe. Gareth Hinds brings his work to a new age of readers with his graphic novel, Poe Stories and Poems. 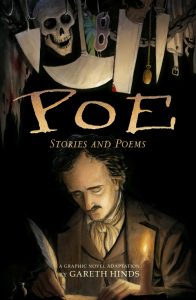 Everyone’s heard of Poe. Edgar Allan Poe. One of the most influential American writers in the 19th century. Maybe you’ve read one or two of his masterful tales. For the first time, Gareth Hinds is bringing Poe’s dark literary works to a visual print.

The Masque of the Red Death, The Cask of Amontillado, Annabel Lee, The Pit and the Pendulum, The Tell-Tale Heart, The Bells, The Raven. Some of these are more well-known than others.

Like so many artists both before his time and to this day, it took self-publishing to get his work in front of the people that mattered.

In Hinds’ visual adaptation, we are provided a checklist of some of Poe’s preferred themes: Death, Disease and the like. Each story marks which of his themes come to play with the story you are about to embark on.

Gareth Hinds does not shy away from covering the great works. From Homer’s Odyssey to Shakespeare’s works, and now bringing Poe into his hall of reverie.

* The Masque of the Red Death brings the reader a vivid story of trying to outrun time and outlast disease. Beautifully illustrated display of the Prince’s extravagant gala to keep the affluent citizens safe from the scourge outside their walls.

* The Cask of Amontillado tells of a drawn out plan to seek revenge against one who has wronged you. How would you seek revenge on one who had damned you years before?

* Annabel Lee, one of Poe’s lighter works, depicts a mans struggle with grief and enduring devotion. Clouds and sandcastles fill this title with dreamy imagery amidst darker thoughts.

* The Pit and the Pendulum is a gruesome display of a few forms of torture known to be used in eras such as the Spanish Inquisition.

* The Tell-Tale Heart presents the reader with a man describing his sanity, while retelling the lengths of a murder he committed. A wild story, though who else would tell such a tale?

* The Bells is a unique, four-part poem, that grows darker with each section. The tolling of the bells can represent a great many things, depending on where you are, and what is going on in the world around you.

* The Raven, perhaps Poe’s most popular work, follows an unnamed man sitting by a fire, aiming to get over the passing of his dear love.

Though we know most of that.

Gareth Hinds strives to bring us beyond what we can read across the page, and help visualize what these situations might entail. How gruesome some of these situations may appear. The characterization of the Red Death in The Masque, how the raven makes the narrator feel in The Raven, or even to illustrate the emotions of the narrator in Annabel Lee.

Some of Poe’s works may even have been a little confusing in a blind reading, but this new representation makes understanding the man much easier.

Edgar Allan Poe has some of the greatest stories of his time. At least, according to some. I personally had a great time refreshing my memory with these tales. You should too. Whether you’re an old fan of such classic works, or a newcomer to these titles Gareth’s work does a great job of bringing out the feeling of these stories.

Edgar Allan Poe has some of the greatest stories of his time. At least, according to some. I personally had a great time refreshing my memory with these tales. You should too!

A fan of media on multiple platforms, I am always watching or playing something! Who knows what I will be on to next?
@mackeyp42
Previous Go deeper into Star Wars: Battlefront II’s story in this new featurette
Next SDCC 2017: Factory Ent bringing Game of Thrones, Flash, BttF and tons more