I think it is probably fair to say that Mega Man 2 for the NES is one of the most celebrated games of all time.

It really defined what Mega Man set out to be: A cool side scrolling shoot-em up where the badass protagonist absorbs the powers of his enemies and then uses all of his abilities to take on the final boss. There is a reason Mega Man 2 is so well received and remembered: plenty of them, actually. There are also a few reasons the game doesn’t feel as good today as it did when it first released.

So, lets get this out of the way. Mega Man had a story, sure, but at this stage it was not front and center. As with most NES games, the story was relegated to the booklet, which meant that a lot of eager kids never bothered to find out what the Blue Bomber was really up to. 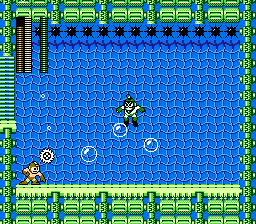 The gameplay in Mega Man 2 is so tight that it really doesn’t matter that the constraints of the 1980’s hardware made designers explain the backstory in a book. You’re a blue man with a gun for an arm. Go wild!

Now, the game does feature player-choice pathing. The player can choose any level he wants and target that boss first. Keen players know that there is an optimal path because certain weapons inflict bonus damage on certain bosses. This is really awesome game design, and it encourages players to go back and play through the game again in a different order to see if they can find the weaknesses of the bosses.

That is basically all for the premise: Players go level to level, fighting bad guys and shooting and jumping. The game is short enough that the simple gameplay doesn’t get old, but long enough that the subtle strategies and intricacies are possible to master.

Chances are that if you’re reading this in 2017, you know exactly how Mega Man plays. You jump and you shoot! It really is that simple.

Sometimes you get upgrades that allow you to shoot platforms that will carry you, and these are needed for the final levels, but honestly, the meme about jumping and shooting through classic Mega Man is very true.

The levels are different enough so that the gameplay feels varied. The water level, even though I hate water levels, feels just floaty enough to be different from the rest of the game, as just one example.

There is one piece of Mega Man 2’s gameplay that still haunts and bothers me to this day. The disapearing blocks. I don’t know who thought this was a good idea or why it was necessary to put the blocks over a pit of death. This would be fine if there was some sort of tell. Maybe there is and I just can’t see it. Either way, these freaking blocks suck.

Mega Man 2 looks fine. I’m not going to mince words: This is an NES game. The pixel art stands up as a timeless way to present art . That being said, even though the system had limited capabilities, each level still feels unique and living. This goes up to and includes bosses, who look a distinct way. 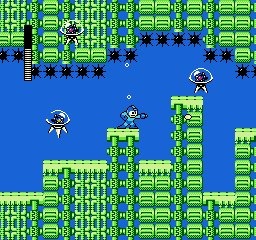 The art behind characters is so expressive that personalities seem implied. Whether this is true or not, that is pretty great considering the technical limitations.

The music is also incredible in Mega Man 2. The title screen music is iconic, and the rest of it stands the test of time.

Mega Man 2 offers an incredible glimpse into the past.

If you can get past one or two overly frustrating sequences where the blocks disapear out from underneath you, Mega Man 2 offers a great platforming experience.

Mega Man 2 is a great, if tough, platformer. Although it is aged, it doesn't feel like an old game. If you've never played Mega Man 2, you owe it to yourself to give it a shot.

Erich was introduced to gaming by his grandfather before he could walk. Since then, he has grown up loving Nintendo and most games in general. He couples his love of videogames with journalism to cover news, provide reviews and tell it how it is in the gaming world.
Previous Nintendo Download: Expand your Fire emblem adventure
Next SDCC 2017: Factory unveils exclusive number 4 – Stan Lee’s God Woke