The second issue of the new Manowar run picks up immediately where the first one dropped off.

The second book is full of action and brutality. We learn a tad more about the new world Aric is on, and learn more about the villains and heroes of this new universe, as well as Aric’s allies in arms. It’s a bumpy ride, so buckle up.

Fitting in the plot:

The story in the second issue of the new Manowar run is pretty well self contained. Aric is given a mission, essentially a suicide 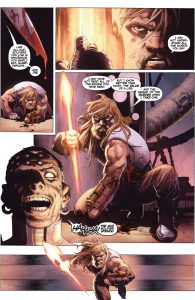 mission, and is given a crew. Without going into spoilers, it is safe to say that the mission in issue two pushed Aric to his limits as a warrior.

The action isn’t predictable, though. I think that is really important for a book where a series is about a specific person or hero. You know they can’t die, but you don’t know how they deal with adversity. X-O Manowar #2 is pretty good for that, in that he doesn’t come across as incredibly one dimensional, in spite of his characterization as a war machine.

Characters are another point of strength for the new book.

There are a bunch of new characters introduced, all playing different strategic roles. We can’t be sure what they do in the future, but a variety of characters can never be considered a bad thing in my opinion.

The book starts in an exciting, but apparent lull in the action. The book ends in a way that lets the reader know that more action and violence is coming.

It gets its point across. The intent of the dialogue and characters is very clear not only by what those characters are saying, but by how that dialogue is presented.

I simply mean that the writing in Manowar is great. It gets the point across without languishing over unimportant details. I really enjoyed actually reading through the book. The writing fits the art style perfectly in that the brutal nature of the art is presented in the writing as well.

I said this when I reviewed the first issue of this new run, and I say it again here. The artwork in Manowar is excellent.

The style is incredibly visceral and brutal. The attention to detail throughout is pretty great, too. The only complaint I have here is on pages where the characters are a bit further away. The close ups and detail frames are incredible, though.

Even minor characters are incredibly detailed and fleshed out. The artwork in Manowar continues to be a reason to come back and see what is going on with Aric of Earth. 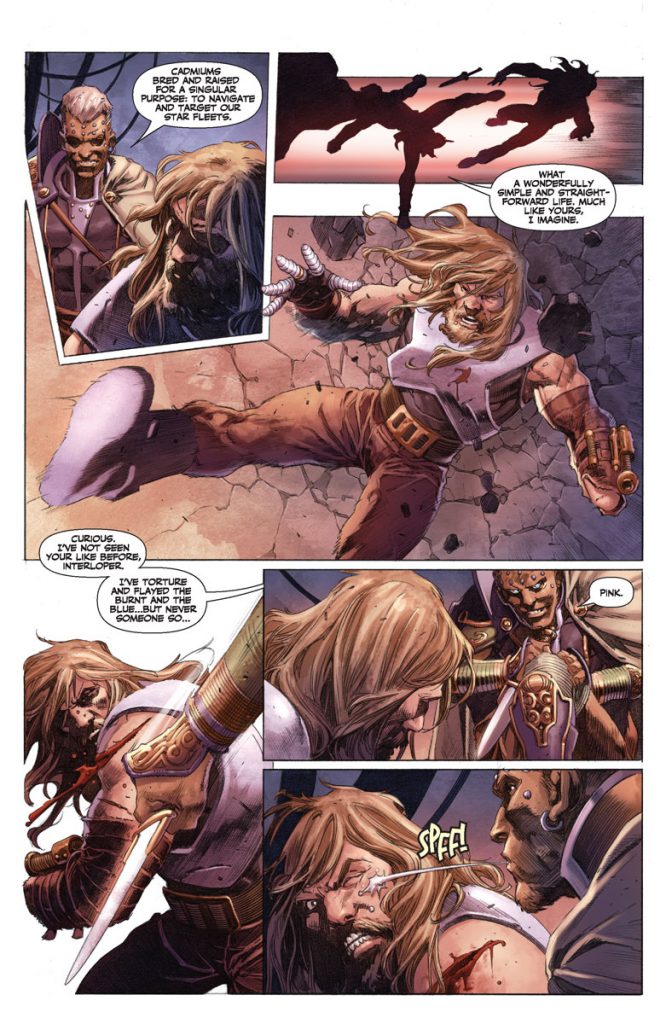 The second issue of the 2017 run of X-O Manowar picks up exactly where the first leaves off. There is lots of action and plot development to keep the story moving.

Manowar continues to be a strong asset for Valiant moving forward, and personally, I can’t wait for the next book.

X-O Manowar #2 brings with it violence, brutality and immense conflict. The plot picks up where the first book left off, and is worth the trip for fans of the character or the medium.

Erich was introduced to gaming by his grandfather before he could walk. Since then, he has grown up loving Nintendo and most games in general. He couples his love of videogames with journalism to cover news, provide reviews and tell it how it is in the gaming world.
Previous The Walking Dead A New Frontier – Episode 4 – Thicker Than Water (PC) Review
Next Nintendo Download: 3..2..1..GO!