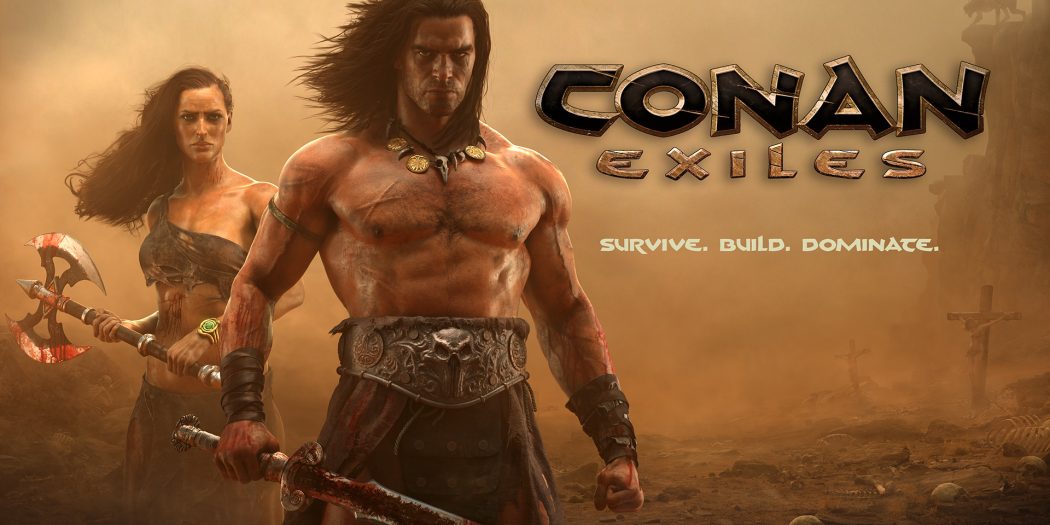 Hello everyone, here is Callum, bringing you another fantastic end of the weekend article. This week, we have an early look at Conan Exiles to deal with. Please note, a more in-depth review will come later, so if I miss some stuff please try not to crucify me.

*Note: This is an early access review copy, so there will be more added to the game down the line.

Alright, so the story here is nice and simple. This world is the one in which Conan inhabits. Yes, that is the entire story. In all seriousness, the only story this game has is given to you in the opening cinematic. You are an exile who, in reference to my earlier paragraph, is being crucified. Presumably you did something not so nice to someone a few steps short of nice themselves, and wound up Exiled. However, in a fantastic moment of convenience, Conan shows up moments before some monsters and frees you. You then repay him by setting out to create the greatest settlement ever.

So, this is how the review will be going down this time around. Since this is a first impression sort of deal, I can’t really give you more than what I experienced. Reading my travel journal of this game will probably not be super exciting however, so I decided to dedicate a section to it instead. Feel free to skip this and get to the technical bits, you nerd.

When I loaded Conan up, several things occurred. I was dropped out of the character creation onto the beginning of a sandstone path, the world stretched out before me. I then proceeded toward a large mural of a god, and listen to his possibly sound advice. He informed me that “all roads lead” to the Exile Island equivalent of Rome. That being the case, my RPG player brain began, I should probably go to this city. And so I journeyed forward, promptly dying 10 minutes later. 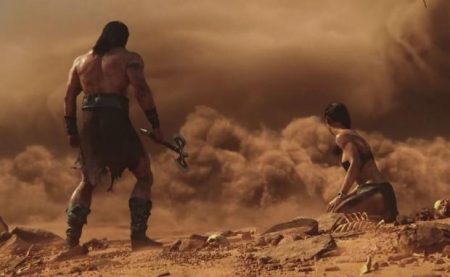 After my next couple of deaths, during which I discovered that you can collect resources, I decided to take another approach. I respawned by a large river, next to which I began to hoard resources like no one’s business. I managed to make quite the little life for myself, a nice sandstone cottage, and all the hyena meat I could want. That being the case, I soon grew bored and somewhat suicidal. This prompted me to attack nearby settlements, in part for resources and in part for the sheer pleasure of doing anything else. I was killed again, and respawned without any items. Hooray!

This may not seem like much of anything to you weird survival game enthusiasts, but wait. I will be dissecting this in my conclusion and explaining why it contributes to the final score. I bet you are glad you didn’t skip this part then.

Allow my reluctance to talk about this inform you of my opinion. The visuals in this game are nice, in a Rust sort of way, but also boring. The Exile Island we inhabit turned out to be a mostly desert sort of place, which the occasional oasis and river to spice things up. This proves to be rather tedious, and does nothing to improve my opinion of the game. The audio on the other hand, is standard. To the degree that I feel it doesn’t deserve its own paragraph. Most of the time I played, I would just turn the sound off and play better music.

Aside from adding some more boring ambience to this already lacklustre landscape, the only purpose appeared to be informing me of monster attacks. It didn’t even fulfill that role correctly, as the screen would gain a red border every time I was hit anyway.

Remember that game I referenced in the previous paragraph, Rust? Well the Conan developers were probably big fans themselves, because that is what Conan is. The player is given a view of his/her arms, each controlled by the left and right mouse buttons respectively. When an item is equipped, it will be used by the right arm, unless it serves an auxiliary function like a torch or a shield. Sounds familiar, right?

This can hardly be a criticism however, as there are very few control methods these crafting survival games can use effectively. And to the game’s credit, the controls are smoother than whisky. Running, swimming and even resource collection works very well, so well done there.

Some of you may be confused as to why I have said so little on gameplay and the like. This is honestly because it is so overused that there is nothing more to say. This gameplay is in almost EVERY survival/crafting simulator. And I am going to assume that you perceptive beauties have picked up on my constant mentioning of Rust.

That is because it was the first thing I thought of after my time with Conan. This entire game feels like a Rust mod, or possibly just a Conan themed server. Everything from the gameplay to the house building mechanics feel like what I experienced in Rust, and I was not impressed.

Now, don’t let my tone dissuade you from buying this game, because it is fun. When I had that little cottage going, I began enjoying myself. Just go into it with the right mindset, and you should be able to squeeze some enjoyment out of it. I could only really recommend this game to Conan fans though.

Since it should still be in beta, might I suggest to the developers that they try and make the world look a bit more exciting, or possibly just inform the player that they should be living in it. I will do a longer, more in-depth piece on this at some point, maybe even including stuff on the multiplayer. Till then readers, take care!

All in all, Conan Exiles is so far looking like a fan-made Rust mod with decent gameplay and lacklustre presentation. I wouldn't buy it, but maybe a Conan fan would.

Young, talented, funny, hard working, duck-like, consistently punning, the center of a collapsing star, older than time and weird. He is two of these things. Beyond that, I'll never tell...
Previous NetherRealm releases Black Canary walkthrough for Injustice 2
Next Toy Fair 17: Super 7 goes full Masters of the Universe