There wasn’t a ton of stuff at The Good Smile Company’s booth at Toy Fair, but what there was, was pretty awesome.

I know, I know – I’m kidding. Any fan knows that Samus Aran is the star of the Metroid series of games from Nintendo. And I’m definitely in that lot. There’s not though, a ton of cool stuff to buy if you are a fan of the classic series.

A few World of Nintendo figures aside, there’s really just The Good Smile Company’s efforts. They’ve produced a Zero Suit Samus and  a Varia Suit Samus in the past, both cool figures. But now they’ve got something else in the offing. Keep in mind that this isn’t a final version, so things might change a bit. So far though, so good for this classic Samus figure. 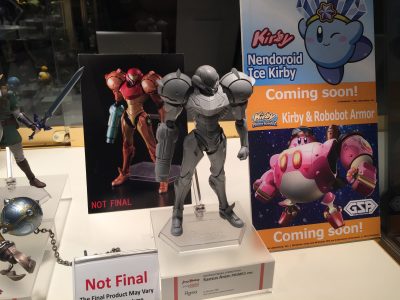 Also kind of neat is that there’s more Kirby on the way! Right now, the company’s Nendoroid figure of the pink puff is the only thing out there, but that’s certainly about to change. With both an Ice Kirby and a Robobot Kirby on the way, fans have some more cool Kirby stuff to look forward to from Good Smile.

Other than that, they had some more of their great Zelda stuff on display, as well as a big expansion for the Nendoroid line. Those are the super-cute, big headed figures by the way. And you can check out some DC movie additions in the gallery below.

Jason's been knee deep in videogames since he was but a lad. Cutting his teeth on the pixely glory that was the Atari 2600, he's been hack'n'slashing and shoot'em'uping ever since. Mainly an FPS and action guy, Jason enjoys the occasional well crafted title from every genre.
@jason_tas
Previous Toy Fair 17: Street Fighter, Mega Man and more at Bluefin
Next Nintendo says Switch footage was taken from a stolen console